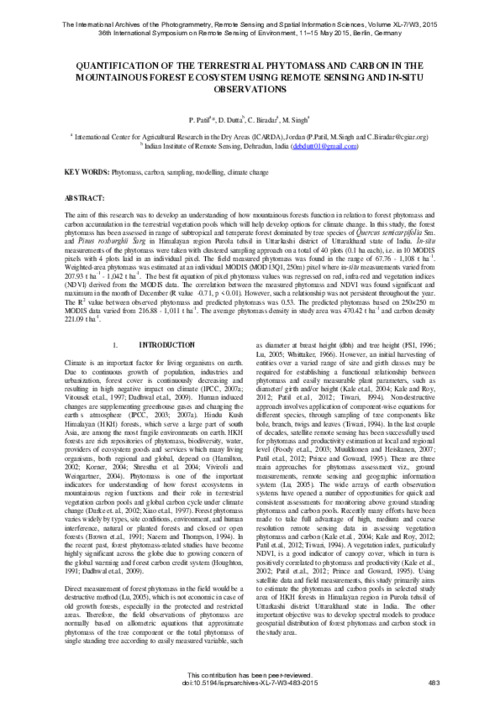 The aim of this research was to develop an understanding of how mountainous forests function in relation to forest phytomass and carbon accumulation in the terrestrial vegetation pools which will help develop options for climate change. In this study, the forest phytomass has been assessed in range of subtropical and temperate forest dominated by tree species of Quercus semicarpifolia Sm. and Pinus roxburghii Sarg in Himalayan region Purola tehsil in Uttarkashi district of Uttarakhand state of India. In-situ measurements of the phytomass were taken with clustered sampling approach on a total of 40 plots (0.1 ha each), i.e. in 10 MODIS pixels with 4 plots laid in an individual pixel. The field measured phytomass was found in the range of 67.76 - 1,108 t ha-1. Weighted-area phytomass was estimated at an individual MODIS (MOD13Q1, 250m) pixel where in-situ measurements varied from 207.93 t ha-1 - 1,042 t ha-1. The best fit equation of pixel phytomass values was regressed on red, infra-red and vegetation indices (NDVI) derived from the MODIS data. The correlation between the measured phytomass and NDVI was found significant and maximum in the month of December (R value -0.71, p < 0.01). However, such a relationship was not persistent throughout the year. The R2 value between observed phytomass and predicted phytomass was 0.53. The predicted phytomass based on 250×250 m MODIS data varied from 216.88 - 1,011 t ha-1. The average phytomass density in study area was 470.42 t ha-1 and carbon density 221.09 t ha-1