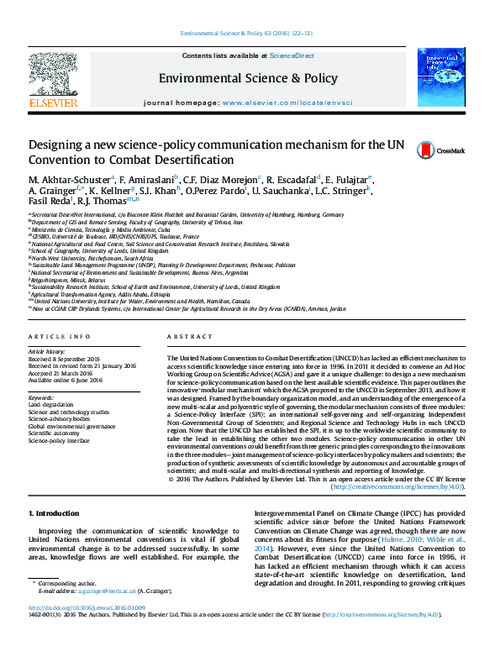 The United Nations Convention to Combat Desertification (UNCCD) has lacked an efficient mechanism to access scientific knowledge since entering into force in 1996. In 2011 it decided to convene an Ad Hoc Working Group on Scientific Advice (AGSA) and gave it a unique challenge: to design a new mechanism for science-policy communication based on the best available scientific evidence. This paper outlines the innovative ‘modular mechanism’ which the AGSA proposed to the UNCCD in September 2013, and how it was designed. Framed by the boundary organization model, and an understanding of the emergence of a new multi-scalar and polycentric style of governing, the modular mechanism consists of three modules: a Science-Policy Interface (SPI); an international self-governing and self-organizing Independent Non-Governmental Group of Scientists; and Regional Science and Technology Hubs in each UNCCD region. Now that the UNCCD has established the SPI, it is up to the worldwide scientific community to take the lead in establishing the other two modules. Science-policy communication in other UN environmental conventions could benefit from three generic principles corresponding to the innovations in the three modules—joint management of science-policy interfaces by policy makers and scientists; the production of synthetic assessments of scientific knowledge by autonomous and accountable groups of scientists; and multi-scalar and multi-directional synthesis and reporting of knowledge.