Potential of Small Ruminants in Andhra Pradesh for promoting rural livelihoods: Institutional and policy gaps to be addressed 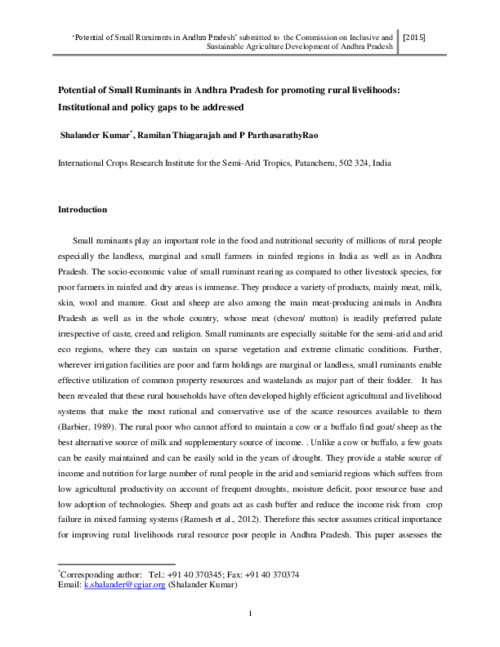 Small ruminants play an important role in the food and nutritional security of millions of rural people especially the landless, marginal and small farmers in rainfed regions in India as well as in Andhra Pradesh. The socio-economic value of small ruminant rearing as compared to other livestock species, for poor farmers in rainfed and dry areas is immense. They produce a variety of products, mainly meat, milk, skin, wool and manure. Goat and sheep are also among the main meat-producing animals in Andhra Pradesh as well as in the whole country, whose meat (chevon/ mutton) is readily preferred palate irrespective of caste, creed and religion. Small ruminants are especially suitable for the semi-arid and arid eco regions, where they can sustain on sparse vegetation and extreme climatic conditions. Further, wherever irrigation facilities are poor and farm holdings are marginal or landless, small ruminants enable effective utilization of common property resources and wastelands as major part of their fodder. It has been revealed that these rural households have often developed highly efficient agricultural and livelihood systems that make the most rational and conservative use of the scarce resources available to them (Barbier, 1989). The rural poor who cannot afford to maintain a cow or a buffalo find goat/ sheep as the best alternative source of milk and supplementary source of income. . Unlike a cow or buffalo, a few goats can be easily maintained and can be easily sold in the years of drought. They provide a stable source of income and nutrition for large number of rural people in the arid and semiarid regions which suffers from low agricultural productivity on account of frequent droughts, moisture deficit, poor resource base and low adoption of technologies. Sheep and goats act as cash buffer and reduce the income risk from crop failure in mixed farming systems (Ramesh et al., 2012). Therefore this sector assumes critical importance for improving rural livelihoods rural resource poor people in Andhra Pradesh. This paper assesses the potential of small ruminant sector in terms of its contribution towards sustainability of rural livelihoods and potential for commercialization in Andhra Pradesh.