Assessing the inter-relationship between vegetation productivity, rainfall, population and land cover over the Bani River Basin in Mali 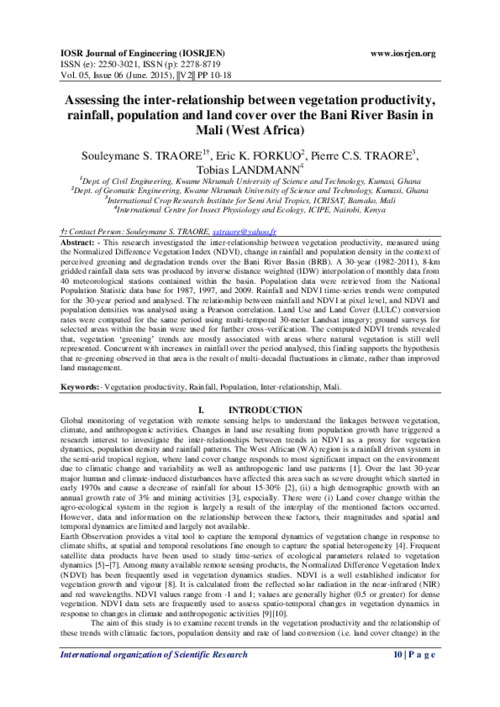 This research investigated the inter-relationship between vegetation productivity, measured using the Normalized Difference Vegetation Index (NDVI), change in rainfall and population density in the context of perceived greening and degradation trends over the Bani River Basin (BRB). A 30-year (1982-2011), 8-km gridded rainfall data sets was produced by inverse distance weighted (IDW) interpolation of monthly data from 40 meteorological stations contained within the basin. Population data were retrieved from the National Population Statistic data base for 1987, 1997, and 2009. Rainfall and NDVI time-series trends were computed for the 30-year period and analysed. The relationship between rainfall and NDVI at pixel level, and NDVI and population densities was analysed using a Pearson correlation. Land Use and Land Cover (LULC) conversion rates were computed for the same period using multi-temporal 30-meter Landsat imagery; ground surveys for selected areas within the basin were used for further cross-verification. The computed NDVI trends revealed that, vegetation ‗greening‘ trends are mostly associated with areas where natural vegetation is still well represented. Concurrent with increases in rainfall over the period analysed, this finding supports the hypothesis that re-greening observed in that area is the result of multi-decadal fluctuations in climate, rather than improved land management.