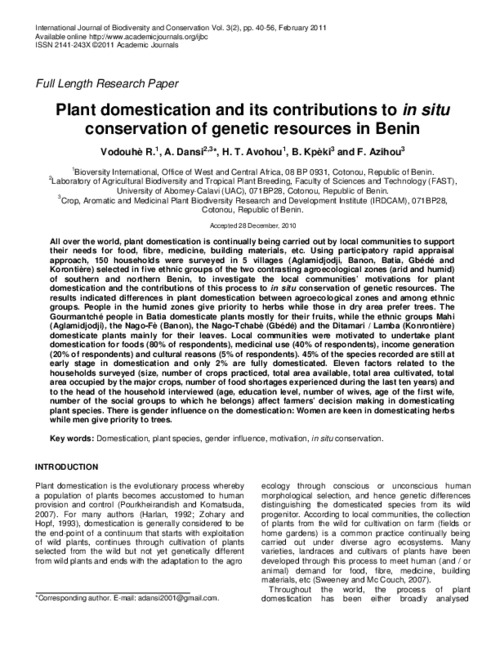 All over the world, plant domestication is continually being carried out by local communities to support their needs for food, fibre, medicine, building materials, etc. Using participatory rapid appraisal approach, 150 households were surveyed in 5 villages (Aglamidjodji, Banon, Batia, Gbédé and Korontière) selected in five ethnic groups of the two contrasting agroecological zones (arid and humid) of southern and northern Benin, to investigate the local communities’ motivations for plant domestication and the contributions of this process to in situ conservation of genetic resources. The results indicated differences in plant domestication between agroecological zones and among ethnic groups. People in the humid zones give priority to herbs while those in dry area prefer trees. The Gourmantché people in Batia domesticate plants mostly for their fruits, while the ethnic groups Mahi (Aglamidjodji), the Nago-Fè (Banon), the Nago-Tchabè (Gbédé) and the Ditamari / Lamba (Konrontière) domesticate plants mainly for their leaves. Local communities were motivated to undertake plant domestication for foods (80% of respondents), medicinal use (40% of respondents), income generation (20% of respondents) and cultural reasons (5% of respondents). 45% of the species recorded are still at early stage in domestication and only 2% are fully domesticated. Eleven factors related to the households surveyed (size, number of crops practiced, total area available, total area cultivated, total area occupied by the major crops, number of food shortages experienced during the last ten years) and to the head of the household interviewed (age, education level, number of wives, age of the first wife, number of the social groups to which he belongs) affect farmers’ decision making in domesticating plant species. There is gender influence on the domestication: Women are keen in domesticating herbs while men give priority to trees.