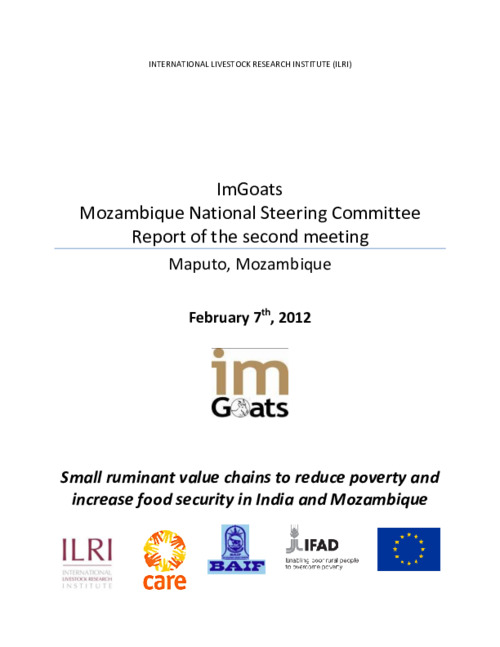 The goal of the “Small ruminant value chains as platforms for reducing poverty and increasing food security in dryland areas of India and Mozambique (imGoats)” project is to increase incomes and food security in a sustainable manner by enhancing pro-poor small ruminant value chains in India and Mozambique. The project proposes to transform goat production and marketing from the current ad hoc, risky, informal activity to a sound and profitable enterprise and model that taps into a growing market, largely controlled by and benefiting women and other disadvantaged and vulnerable groups; while preserving the natural resource base. The specific objectives of the project are two: 1. To pilot sustainable and replicable organizational and technical models to strengthen goat value chains in India and Mozambique that increase incomes, reduce vulnerability and enhance welfare amongst marginalized groups, including women; and 2. To document, communicate and promote appropriate evidence-based model(s) for sustainable, pro-poor goat value chains. The project is being implemented by CARE in Mozambique, while the overall leadership and co-ordination of the project is done by the International Livestock Research Institute (ILRI). In each project country there is a national steering committee whose role is as follows: 1. To provide strategic guidance to the project at critical times; 2. To identify key linkages with other organizations/projects involved in similar efforts to share experiences and lessons and; 3. To help disseminate/communicate lessons from the project and facilitate scaling up and out. It was agreed during the first meeting of the national steering committee in June 2011 that the second meeting should be held after approximately 6 months but ensuring that it coincides with certain milestones in the project implementation. Since there had been a slight delay with the household survey and the value chain analysis it was decided to wait until these two activities were finalized before having the second meeting. This report provides an account of the second meeting of the imGoats Mozambique National Steering Committee.