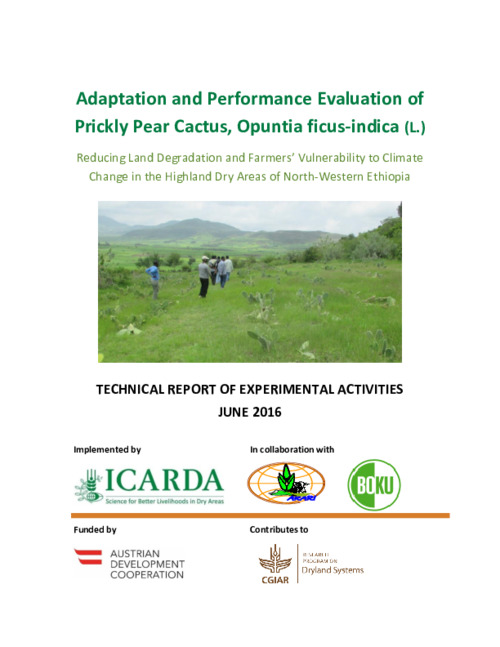 The objective of the trial was to evaluate adaptation of different Cactus cultivars for fodder production in the model village of Gumara- Maksegnit watershed. Livestock feed shortage as a result of grazing land degradation and crop failure due to shortage and poorly distributed rain is critical in the Gumara- Maksegnit watershed. To assuage this problem identifying and planting feed crops with high water use efficiency (Cactus) that produce acceptable yield has to be considered in the watershed. An experiment was conducted to evaluate the adaptability and productivity of different Cactus cultivars under the ecological conditions of Gumara- Maksegnit watershed in the year 2012/2013 for 15months. Five cultivars of cactus (Sulhuna, Gerao, Dilaledik, Gerwanlayele and Ameudegaado Belesa) which were collected from Eastern zone of Tigray and one cultivar (Local) collected from the watershed were used as experimental treatments. Cactus cladodes were planted at a density of 6667plants ha-1 by using a Randomized Completely Block Design (RCBD) with three replications. To assess their adaptability and productivity percent survival of cladodes, days taken to sprout, percent of plants sprouted, number of cladodes formed per plant, size of newly formed cladodes, average weight of cladodes and dry biomass yield were recorded. The results indicated that cactus cultivars evaluated showed statistically significant variation (p <0.05) in days taken to sprout, number of cladodes formed per plant, width of cladodes (cm), average weight of cladodes (g), and dry biomass yield (kg/plant) while there is no statistical significant difference (p> 0.05) in percent of plants sprouted, percent survival of cladodes, length of cladodes (cm) and dry matter percent of cladodes (DM%). From the cultivars evaluated Sulhuna, Dilaledik and Ameudegaado Belesa were significantly at par but higher than others in number of cladodes formed per plant, average weight of cladodes and dry biomass production which are the best indicators of the superiority of cultivars as a forage source and adaptation of cultivars to the environment. Thus according to the results of this study Sulhuna, Dilaledik and Ameudegaado Belesa varieties are recommended for wider use in the watershed.