Report of the third meeting of the imGoats India National Advisory Committee, 18 October 2012 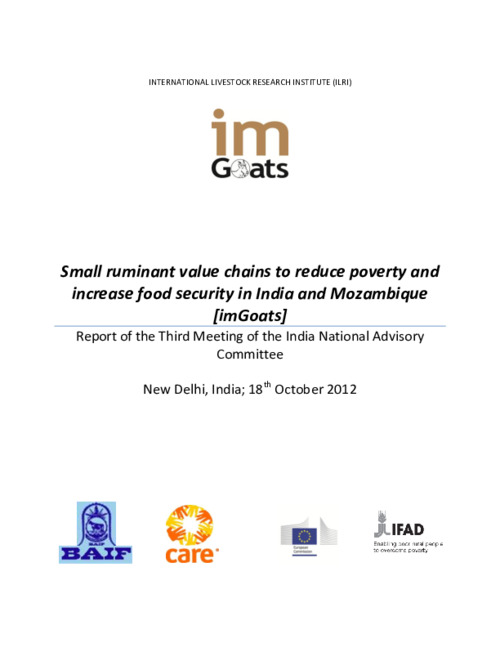 The goal of the “Small ruminant value chains as platforms for reducing poverty and increasing food security in dryland areas of India and Mozambique [imGoats]” project is to increase incomes and food security in a sustainable manner by enhancing pro-poor small ruminant value chains in India and Mozambique. The project proposes to transform goat production and marketing from the current ad hoc, risky, informal activity to a sound and profitable enterprise and model that taps into a growing market, largely controlled by and benefiting women and other disadvantaged and vulnerable groups; while preserving the natural resource base. The specific objectives of the project are two: a) to pilot sustainable and replicable organizational and technical models to strengthen goat value chains in India and Mozambique that increase incomes, reduce vulnerability and enhance welfare amongst marginalized groups, including women; and b) to document, communicate and promote appropriate evidence-based model(s) for sustainable, pro-poor goat value chains. In addition to goat keepers, beneficiaries include other goat value chain actors, including small-scale traders, input and service providers. The project is following innovation systems approaches within a value chain framework. The value chain models is implemented through the mechanisms of innovation platforms, which is comprised of multiple and diverse stakeholders. Using Outcome Mapping as Monitoring and Evaluation framework, the project documents the participatory approaches used, processes followed, outcomes generated and lessons learned to generate research evidence towards the development of goat value chain models that benefit the poor. Lessons learned and opportunities for scaling up and out will be communicated to policymakers and development practitioners. The project is being implemented by BAIF in India and CARE in Mozambique, while the overall leadership and co-ordination of the project is done by the International Livestock Research Institute (ILRI). The second meeting of the imGoats India National Advisory Committee (NAC) took place on 10-11th February 2012 in Udaipur. This report provides an account of the third meeting of the imGoats India National Advisory Committee (NAC) held at New Delhi on 18th October 2012.