Agromorphological characterization of Sesamum radiatum (Schum. and Thonn.), a neglected and underutilized species of traditional leafy vegetable of great importance in Benin 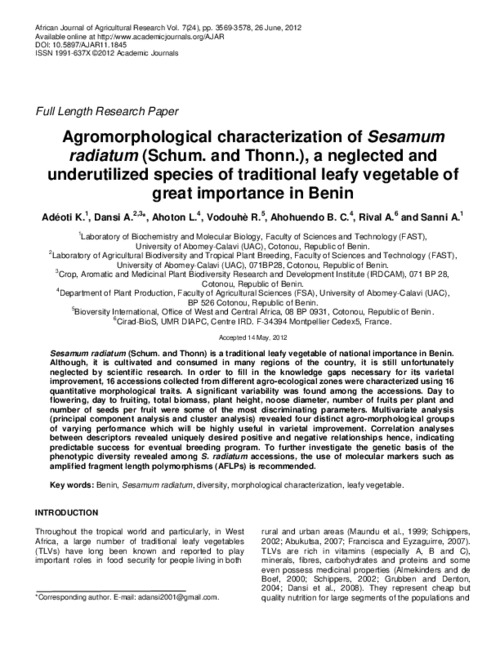 Sesamum radiatum (Schum. and Thonn) is a traditional leafy vegetable of national importance in Benin. Although, it is cultivated and consumed in many regions of the country, it is still unfortunately neglected by scientific research. In order to fill in the knowledge gaps necessary for its varietal improvement, 16 accessions collected from different agro-ecological zones were characterized using 16 quantitative morphological traits. A significant variability was found among the accessions. Day to flowering, day to fruiting, total biomass, plant height, noose diameter, number of fruits per plant and number of seeds per fruit were some of the most discriminating parameters. Multivariate analysis (principal component analysis and cluster analysis) revealed four distinct agro-morphological groups of varying performance which will be highly useful in varietal improvement. Correlation analyses between descriptors revealed uniquely desired positive and negative relationships hence, indicating predictable success for eventual breeding program. To further investigate the genetic basis of the phenotypic diversity revealed among S. radiatum accessions, the use of molecular markers such as amplified fragment length polymorphisms (AFLPs) is recommended.