Assessing impact of Climatic Variability on Crop Yields in Rajasthan 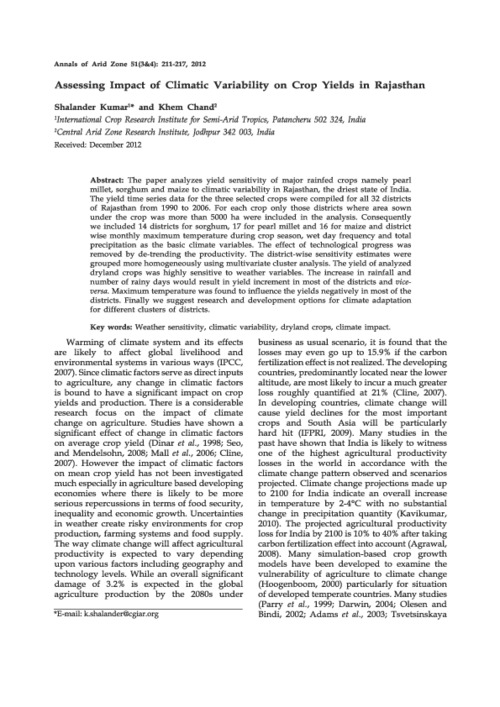 The paper analyzes yield sensitivity of major rainfed crops namely pearl millet, sorghum and maize to climatic variability in Rajasthan, the driest state of India. The yield time series data for the three selected crops were compiled for all 32 districts of Rajasthan from 1990 to 2006. For each crop only those districts where area sown under the crop was more than 5000 ha were included in the analysis. Consequently we included 14 districts for sorghum, 17 for pearl millet and 16 for maize and district wise monthly maximum temperature during crop season, wet day frequency and total precipitation as the basic climate variables. The effect of technological progress was removed by de-trending the productivity. The district-wise sensitivity estimates were grouped more homogeneously using multivariate cluster analysis. The yield of analyzed dryland crops was highly sensitive to weather variables. The increase in rainfall and number of rainy days would result in yield increment in most of the districts and vice-versa. Maximum temperature was found to influence the yields negatively in most of the districts. Finally we suggest research and development options for climate adaptation for different clusters of districts