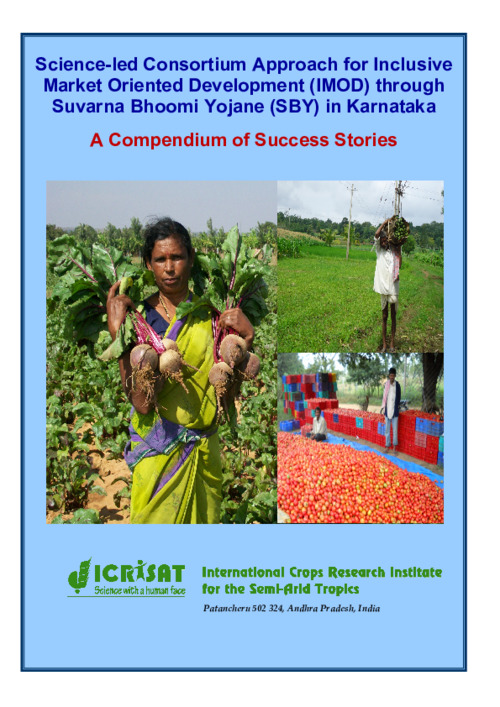 Government of Karnataka has taken up a novel initiative viz., Survarna Bhoomi Yojane (SBY) to support small and marginal farmers by shifting them from growing low-value crops to high-value crops. The Government has deposited d Rs. 10,000 cash into the bank accounts of the farmers as an incentive to motivate them to develop two acres of land with high value crops. The Department of Horticulture, Government of Karnataka, has supported ICRISAT in providing technical support to SBY-H beneficiaries, totalling 0.25 million in 30 districts. To help small and marginal farmers achieve improved yield and production, taluk-wise nutrient management recommendations were developed for major crops based on the soiltest results from Bhoochetana program, and shared with the department officials, NGO partners and the farmers through farm facilitators. For demonstrating the benefits of improved management practices, farmer participatory demonstrations were conducted in all the 30 districts. Research technicians, NGO partners, DoH officials and farm facilitators were given demonstrations on best-bet management practices including soil-test-based nutrient management, water management, best IPM, use of improved cultivars and apiculture. Successful case studies were identified and information was collected covering major socioeconomic and agronomic aspects. These success stories from different districts clearly demonstrated increased crop yields of chili, brinjal, onion, okra, tomato, garlic, beans, flowers, watermelon, etc. The yield was increased by 8 to 65 per cent over the farmers’ practices in different districts for different crops. These results clearly showed the benefits of improved management practices and increased the incomes of the farmers. The information from success stories also revealed that there is a great deal of gender participation. About 24 per cent of women farmers from different social groups participated in diversifying their crop pattern from low value crops to high value crops and were subsequently benefited. The beneficiaries, who have the facility of irrigation, effectively put their efforts to improve their yield, which resulted in good output. Rain-fed cultivation of selected of crops has responded on par with irrigated cultivation due to improved management practices. Beneficiary farmers feel that consortium approach in implementing the SBY yielded greater benefits in terms of timely reaching out to farmers as well as consortium partners. Also spillover effect was observed as the neighboring farmers too adopted improved practices to benefit from increased productivity. Suvarna Bhoomi Yojane (SBY) through its technical backstopping benefited in upgrading farmers’ capacity with improved agricultural technologies which in turn helped in successfully intensifying and diversifying smallholder farming and implementing inclusive market oriented development approach (IMOD). In brief, the ICRISAT-DoH led consortium has helped the farmers in increasing their crop yields and incomes.