Spatial Variability of Selected Soil Attributes under Agricultural Land Use System in a Mountainous Watershed, Ethiopia 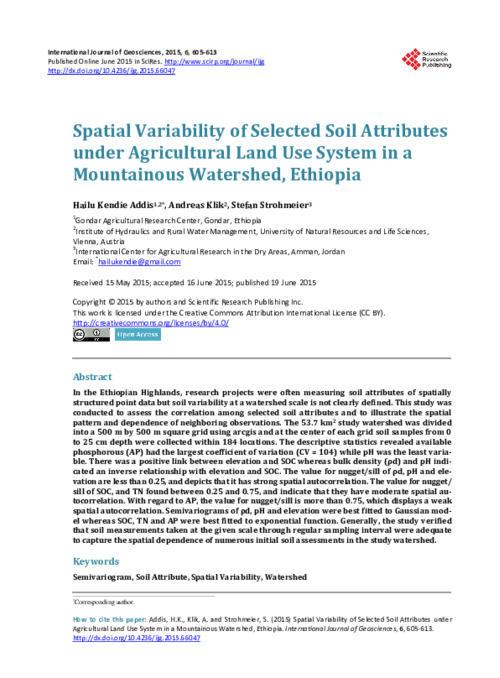 In the Ethiopian Highlands, research projects were often measuring soil attributes of spatially structured point data but soil variability at a watershed scale is not clearly defined. This study was conducted to assess the correlation among selected soil attributes and to illustrate the spatial pattern and dependence of neighboring observations. The 53.7 km2 study watershed was divided into a 500 m by 500 m square grid using arcgis and at the center of each grid soil samples from 0 to 25 cm depth were collected within 184 locations. The descriptive statistics revealed available phosphorous (AP) had the largest coefficient of variation (CV = 104) while pH was the least varia- ble. There was a positive link between elevation and SOC whereas bulk density (ρd) and pH indi- cated an inverse relationship with elevation and SOC. The value for nugget/sill of ρd, pH and ele- vation are less than 0.25, and depicts that it has strong spatial autocorrelation. The value for nugget/ sill of SOC, and TN found between 0.25 and 0.75, and indicate that they have moderate spatial au- tocorrelation. With regard to AP, the value for nugget/sill is more than 0.75, which displays a weak spatial autocorrelation. Semivariograms of ρd, pH and elevation were best fitted to Gaussian mod- el whereas SOC, TN and AP were best fitted to exponential function. Generally, the study verified that soil measurements taken at the given scale through regular sampling interval were adequate to capture the spatial dependence of numerous initial soil assessments in the study watershed.