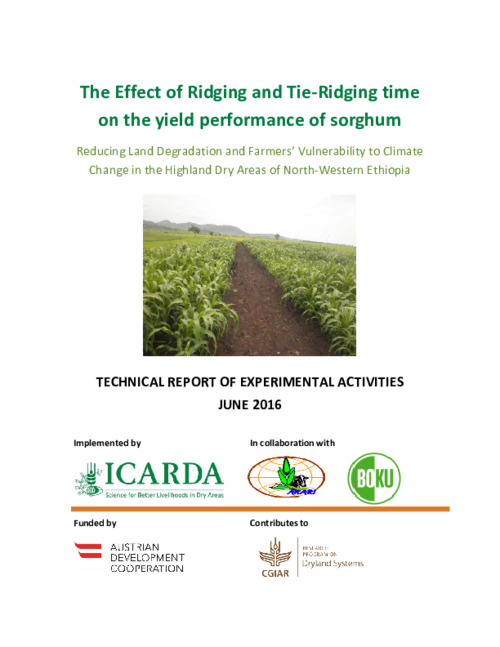 Erteban Wondifraw. (12/11/2016). The Effect of Ridging and Tie-Ridging time on the yield performance of sorghum.

The effect of timing of tie-ridging on the yield and yield components of sorghum was studied at Gumara-Maksegnit watershed, Gondar Zuria woreda, Amhara Region, Ethiopia, with budget with a budget support of ICARDA. In the study area the amount of annual rainfall ranges from 995 to 1175 mm, however; more than 70% of the rain falls within three months (from June to August). Hence, there is a concern on the occurrence of unbalanced soil moisture which demands an urgent attention. In the watershed, as much of the rain happed during three months, water logging is observed in the vertisols, on the other hand after August when a peak time of flowering for many crops; the amount of rain decreases dramatically thus water shortage at these stages cause high yield penalty. Therefor it is important to manage the soil moisture (for appropriate plant support) during these two contrary seasons happed in the watershed, tie-riding is a common practice to balance soil moisture by releasing water from the plots when it is excess and by harvesting water into the plots for extended plant use. Therefore, the experiment was done to evaluate timimg of tie-ridging for sorghum yield. The experiment was implemented during 2014 and 2015 seasons at farmer’s plot where vertisols is dominant. These farmers were made to involve during this experiment through field days at different stages of the plant growth; they have gave their views on the importance moisture management for their sorghum field and promised to act accordingly. The experiment was laid out in a randomised complete block design (RCBD) in three replications. There were 8 different timing of tie-ridging treatments. All the necessary management practices and inputs (87kg N and 46 kg P2O5 per hectare) were supplied equally for each plot. Data were analysed for variance and LSD at 5% level of significance. The result revealed that timing of tie-ridging had significant effect on grain and stover yield of sorghum. The maximum yield was recorded at planting at flat land, ridged three weeks after planting and tied 6 weeks after planting.