Effect of deficit irrigation on growth and yield of Garlic 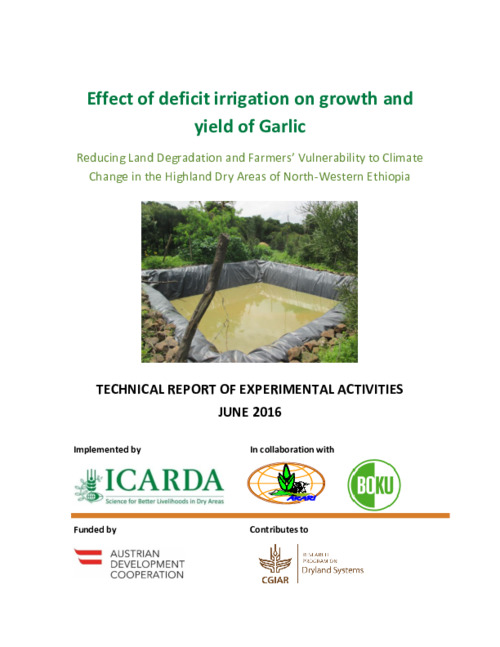 Erteban Wondifraw. (12/11/2016). Effect of deficit irrigation on growth and yield of Garlic.

The effect of deficit irrigation (DI) on the yield and yield components of garlic was studied at Gumara-Maksegnit watershed with a budget support of ICARDA. In the study area irrigation practices are common for two crops, onion and garlic. The sources of water for irrigation is limited (only few small streams) and these cannot support all farmers need in the watershed. On the other hand farmers’ irrigation demand is increasing from time to time and their irrigation management is usually poor. To satisfy many farmers in the watershed, water productivity should be increased in the area, DI is known by increasing water productivity with insignificant or minimum yield penalty. Therefore, the experiment was done to evaluate DI on the yield of garlic and water productivity. The experiment was implemented at two farmers’ plot where rain water harvesting ponds were developed by ICARDA for the purpose of supplemental irrigation. These farmers were fully involved during this experiment. The experiment was laid out in a randomized complete block design (RCBD), and has investigated in the irrigation seasons of the year 2015 and 2016. There were seven DI treatments, such as farmers practice/control, deficit during initial, development, mid and late stages, deficit throughout the growing stages and full irrigation amounts. Irrigation depth was applied depending on the soil moisture and for full irrigation each irrigation was applied up to field capacity and for DI irrigation was applied at 70% depletion or almost half of the soil field capacity requirement. The amount of water supplied was measured and application time was in 7days interval. The recommended amount of P2O5 and N fertilizers 92kg/ha and 105 kg/ha respectively were applied to each plot at transplanting. All the necessary agronomic practices such as weeding, earthening up, row and plant spacing were the same for each plot. Data were analysed for variance and LSD at 5% level of significance. As the one year result showed that, DI had significant effect on yield and water productivity of Garlic. The maximum yield was recorded at full irrigation applications while, the minimum yield was obtained at application of deficit irrigation throughout the season. All stages deficit gave maximum water productivity and the lower water productivity was recorded at farmers practice. To give a reliable conclusion it will be necessary to include the second year data which is on trial.