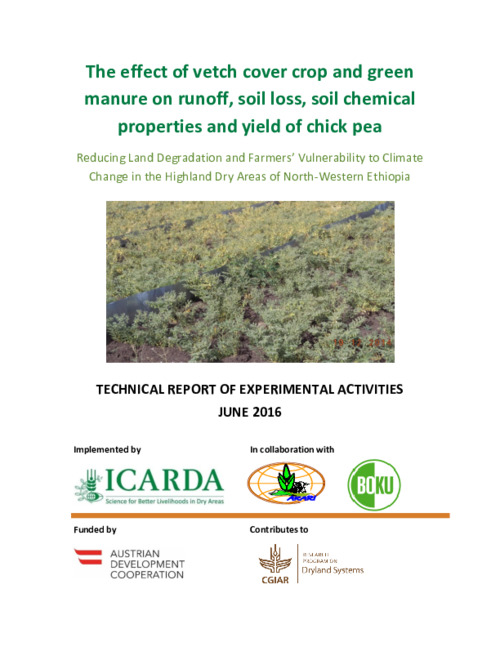 Effects of vetch cover crop and green manure on runoff, soil loss, soil chemical properties and yield of chickpea. A field experiment was conducted during growing seasons of 2014 and 2015 to evaluate the effect of vetch cover crop and green manure on runoff, soil loss, soil nutrients and yield of chickpea with expected results of soil quality improvements by increasing organic matter, carbon sequestration, water holding capacity, soil structure and reduce soil erosion. The farmer in the study area mostly fallows their field throughout rainy season for chickpea production rather than growing cover crops, which is serving as surface protection. It is common practices in most chickpea growing areas of the region and the country at large. Erosion occurs most rapidly on cropland where there is no soil cover. The activity was launched to improve the production efficiency of land through double cropping as well as to improve soil fertility, surface protection from erosion and the cover crop biomass may be used to animal fodder. The plot experiment contained four treatments arranged in Randomized Complete Block Design with three replications: • Control plot (Farmers’ practice: fallowing throughout rainy season), • Remove vetch biomass for animal feed and apply recommended DAP fertilizer at chickpea planting • Incorporation of vetch as a green manure without application of fertilizer • Incorporation of vetch as a green manure with half recommended DAP The community participated during plot installation. The result showed that crop cover protects 14.4% of soil in 2014 and 32.7% in 2015 and it has highest yield advantage as compared to control. Therefore, the outcomes of the activity looks reasonable and it will be adopted by the community and the country at large.