Evaluation of under-sowing Vetch in sorghum for intensifying production systems 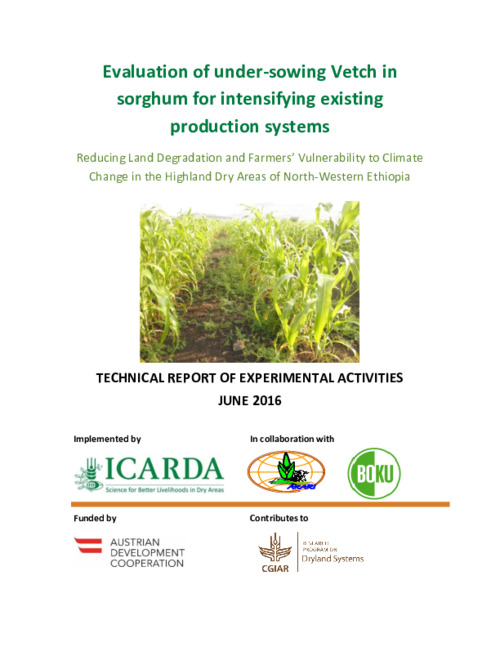 The objectives of the research were i) to explore the production potential of diversified sorghum- forage legumes intercropping systems under different planting patterns, and ii) to evaluate the possible amount of forage produced from a place which will not be utilized by the crop. A food shortage interim of quality and quantity is the major livestock production problem in the Gumara-Maksegnet watershed as well as in many parts of the country. The Vetch forage crop adaptation trail was conducted in Gumara-Maksegnet watershed in previous years and the best adapted and high yielder Vetch species were identified. However, there is a serious adoption of forage crops because they compute the food crop for land. Vetch intercropping with the major food crop in the study area (sorghum) was conducted to find the entry point of forage crop adoption. Vetch intercropping with sorghums with 7 different treatments (with different spacing and time of Vetch sawing) was conducted in Gumara-Maksegnet watershed in RCBD design for two consecutive years (2014 and 2015).The introductions of Vetch forage in sorghum had an effect in sorghum yield and yield parameters however this study confirmed that the possibilities of introduction of Vetch forage species without adverse effect on sorghum productivity.