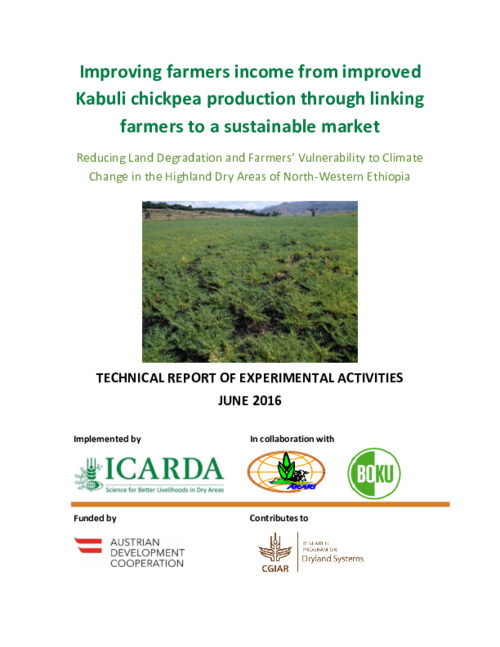 In Gumara-maksegnet watershed, chickpea is major crops for goat keepers. Chickpea residue is a highly nutritious livestock feed widely used by farmers in the area. Farmers have grown the local chickpea variety with traditional system. In addition, majority of farmers mainly get their seeds from informal channels. As a result the productivity of chickpea was very low. However, Gondar agricultural research center has tested the adaptability of improved chickpea variety in the watershed and found high yielder chickpea varieties. Improved chickpea the productivity of chickpea through research is not enough to improve the livelihood of goat keepers sustainably, there has to be some mechanisms that convert the research results into business which can fetch income that goes to farmers income. Therefore, this research intervention was designed to improve farmer’s income through improved chickpea seed production by targeting and creating sustainable market in the area. Research to business (R2B) model was used to link farmers in to a sustainable market. The research to business model was implemented in such a way that partnerships, which include private sector, smallholder farmers and government, are key to gaining greater access to markets for small farmers so that they can increase their incomes. To convert research outputs to business sustainably, community based goat breeding participants used as an entry point for chickpea community based seed production.The technology package used was improved Kabuli chickpea varieties (Arerti) with improved agronomic packages (row planting, proper weeding, bollworm control) etc. The activity has been conducted for two years (2014-2016). In the two year about 141 farmers with a total farm size of 57.5 ha were reached and covered by improved varieties. A number of steps were followed to link the seed growers to sustainable market. Tsehay union through primary cooperative was used as a channel to sell the produced grain as a seed. Seed production procedures followed and field inspections were made to select qualified fields. Out of 99 participant farmers in the second year about 77 farmers field met the seed inspection criteria and linked with the market. Regarding the productivity of the variety compared to the local variety, the improved chickpea variety had more than double yield advantage and had 601% marginal rate of return (MRR). Therefore, it was recommended to further scale out the chickpea technology package and to use R2B as an approach to link famers into sustainable market.