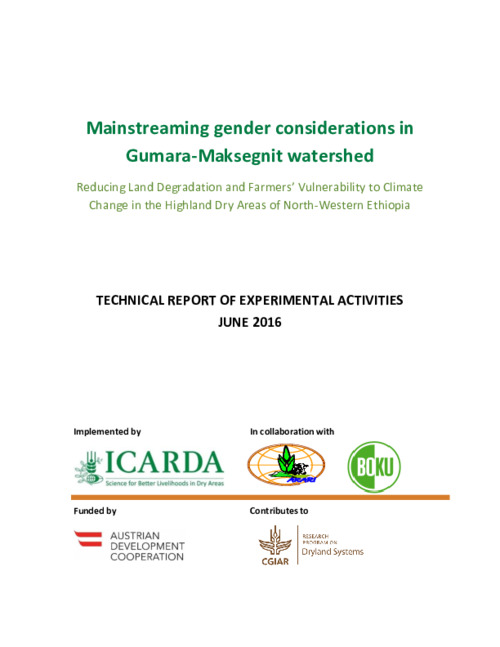 Land degradation and moisture stress have become major threats to the farmers’ livelihoods in Gumara-Maksegnit watershed. Their land is no longer as productive as it used to be; rainfall is neither predictable nor sufficient; and access to alternative sources of water, while improving, is still limited. These, combined with other challenges including access to sufficient credit and agricultural inputs have resulted in reducing household income in the area. The project operated on the premise that rural communities depend on a variety of livelihood strategies to meet their basic needs - these include growing crops, raising livestock, and a pursuit of alternative income generating opportunities. Adopting a holistic approach allowed the project to appreciate the complexity of the challenges and seek solutions through multiple interventions. The gender mainstreaming actions of the project were an important component for the implementation of this approach. All the researchers engaged in the project were trained and equipped with essential tools to mainstream the key component of gender in all their activities. Hence due attention was given to equitable participation of women in all activities in the watershed. In addition, the project has introduced fuel-saving stoves commonly referred to as the “Mirt” stove in order to reduce women’s drudgery, improve their health by reducing the exposure to open smoke, and eventually to provide young unemployed women with opportunities to generate income. This activity was implemented with budget support from CGIAR project “Strategic Interventions to Simultaneously Reduce Women's Drudgery, Youth Unemployment, and Ecosystem Degradation” (CRP–WLE, 2014-2016) and is still ongoing in the frame of that project. Overall 800 stoves were produced and distributed to date as part of a “stove-for-work program”: the households that received the stoves worked for the project, dedicating over 5,000 hours to maintain/construct water and soil conservation structures, and planting over 40,000 trees. Data on stove impacts on livelihood were collected and are being analysed.