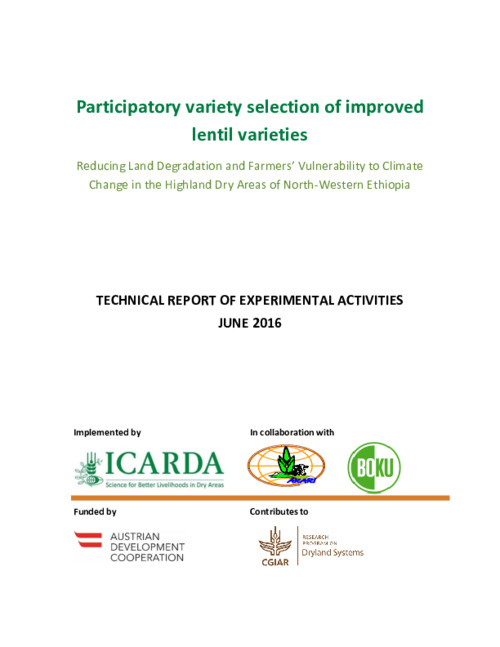 The objective of this activity was to evaluate and identify adaptive, high-yielding and disease tolerant lentil varieties in Gumara makesgnit watershed in Gonder zuria district. Lentil (Lens culnaris Medik) in Ethiopia is amongst the principal cool season food legumes grown in Ethiopia mainly by subsistence farmers usually under rain-fed conditions. However, its production is constrained due to biotic and abiotic factors. There is a huge gap between potential yield and the actual yield farmers are getting for lentil in the zone. The gap between actual and potential yield is the result of mainly lack of adoption of improved production packages. Farmers are still using low yielding local varieties of lentil. In order to minimize this gap participatory variety selection with the objectives of selecting high yielding, disease tolerant and acceptable lentil varieties adapted to the growth environment was conducted in Gumara makesgnit watershed. 10 released varieties each of were evaluated in RCBD with mother and baby trial in three sites in 2013 and 2014 main cropping season. In 2013 and 2014 combined ANOVA for yield and yield related traits revealed highly significant (P≤0.05) differences except days to maturity in 2014. The significant interaction of the varieties showed that the varieties respond differently across the sites. In this study farmers’ selection and researchers were confirmed that Gudo, Teshale and Alemtena were found good for yield and other agronomic traits among the ten tested varieties. The highest yield were obtained on varieties R-186 and Gudo, which is 992.4 kg/ha and 893.9 kg/ha respectively. R-186 is the top yielding variety but it is late maturing and an obsolete variety and due to this reason farmers must grow Gudo as the first choice and Teshale as secondary choice.