Assessments on the impact of stone bunds on water erosion in the Gumara-Maksegnit watershed, Northern Ethiopia 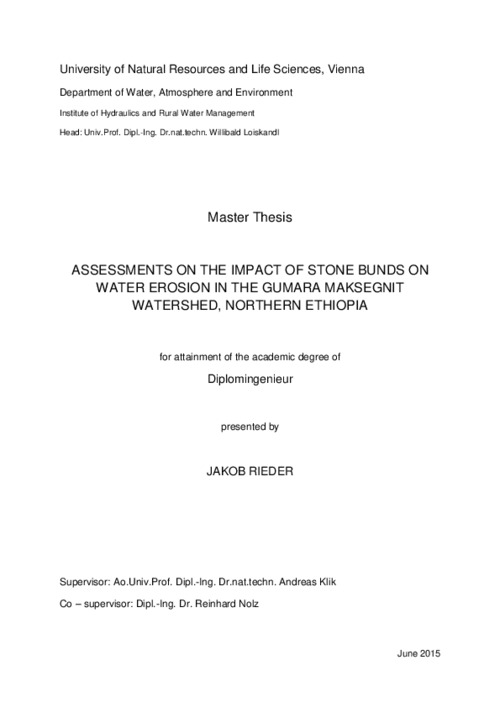 Soil erosion due to heavy rain events during the rainy season from June to September is a big threat to the Ethiopian highlands. About 85 % of the total population of Ethiopia, live from agriculture and therefore sound soils are crucial for the country´s nutrition supply and they act as a backbone for development and progress. In order to reduce water erosion on sloped acres in the experimental site, embankments of stones were built along the contour lines during the last years. These stone bunds reduce downslope surface runoff and therefore also soil erosion decreases. This thesis assesses the effectiveness of stone bunds as a soil conservation measurement. The project was carried out from the middle of June until the beginning of September in 2013 in the Gumara – Maksegnit watershed, with an area of 54 km², in the Amhara region in Northern Ethiopia. At the beginning of the field work two erosion plots, each with an area of 60 m², were installed in the field next to each other. The only difference between both plots was, that one plot had a stone bund on its´ slope toe and the other on was without a stone bund. Slope, soil texture, rock fragment cover and canopy cover were equal on both plots. Samples were taken of the surface runoff of both plots and through laboratory analysis, soil erosion rates of both plots could be determined and compared with each other. Also the influence of the maintenance of a stone bund on soil erosion was assessed. Additionally other important parameters, which influence soil erosion, like slope, canopy cover, and rock fragment cover were determined.