Evaluation of the Impact of Stone Bunds on Soil Loss and Surface Runoff in the Gumara-Maksegnit Watershed, Northern Highlands of Ethiopia 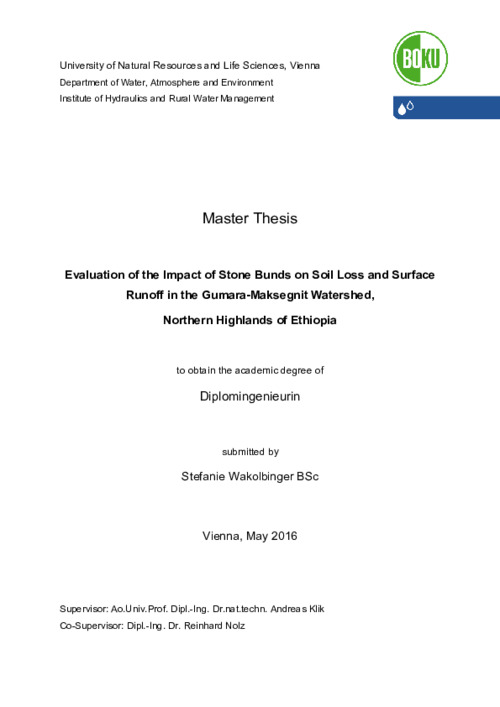 Ethiopia is highly affected by land degradation and one of the key problems is soil erosion. It is mainly caused by the rapid population increase, deforestation, low vegetation cover and unbalanced livestock and crop production. As far as about 85 % of the Ethiopian population depends on agriculture, it is essential to prevent or reduce further degradation. In the Northern Highlands of Ethiopia, stone bunds are widely used as a soil and water conservation measure (SWC). Stone bunds are little embankments of stones along the contour lines and influence the translation processes of surface runoff. In June 2015 a field experiment in the Gumara-Maksegnit watershed was carried out to investigate the impact of stone bunds on surface runoff and soil erosion using 4 m wide and 20 m long bounded plots monitoring surface runoff and sediment yield with and without stone bunds. The average slope of the plots is about 8 %. The novel design of the plots (with stone bunds) allowed the monitoring of runoff along the contour (stone bund) as well as the bund overflow. The sideflow and overflow were separately collected and routed via a multi-slot-divider to different storage ponds. Representative samples were taken at a roughly weekly interval for a sediment concentration assessment. Precipitation was measured in daily intervals next to the study site. Total rainfall of the observation period in 2015 (July to September) was 601 mm. During the same time period plots without stone bunds generated approximately 15 t/ha soil loss, whereas plots with stone bunds produced approximately 4 t/ha. However, only 19 % of the sediment from the treated plots was transported over the stone bunds, the rest (81%) either deposited in front of the bund or moved along and was spilled as sideflow. Throughout the investigation period 91 mm of surface runoff were produced on the treated plots. This corresponds to a runoff coefficient of 0.17. Around 30% of this runoff overtopped the stone bunds, the remaining part ran off along the contour. Overall, stone bunds can be seen as effective soil and water conservation measures under the conditions of the Ethiopian Highlands