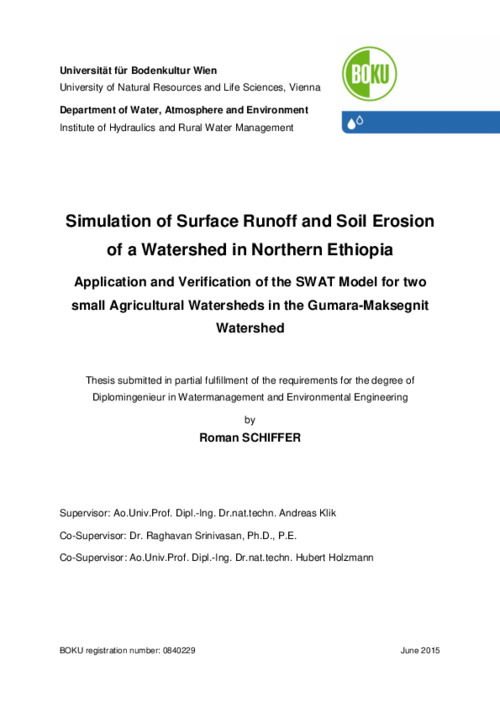 Roman Schiffer. (30/6/2015). Simulation of Surface Runoff and Soil Erosion of a Watershed in Northern Ethiopia - Application and Verification of the SWAT Model for two small Agricultural Watersheds in the Gumara-Maksegnit Watershed. Vienna, Austria: University of Natural Resources and Life Sciences, Center for Development Research (BOKU - CDR).

Land degradation is a major issue in the Ethiopian Highlands. Deforestation leads to ongoing soil erosion during the rainy season and thus the hydrology of a watershed changes as high erosion rates and dense gully networks cause a direct drainage of rain water usable for crop production. The application of hydrological models can provide a link between local watershed characteristics and the generation of runoff and sediment loss in the watershed. In the Gumara-Maksegnit watershed (56 km²), located in the Lake Tana Basin, Amhara, Ethiopia, various field experiments were carried out to investigate different effects of soil and water conservation (SWC) structures at the field level. Objective of this master thesis is the establishment of a calibrated SWAT model in order to be used for up-scaling of SWC impacts to gain a deeper insight into SWC interactions at sub-watershed level related to hydrological and land degradation issues. The study area are two small sub-watersheds of the Gumara-Maksegnit watershed. They are located close to each other with an area of 31 and 41 ha, respectively. 80 % of the area is steeper than 10 %. In one sub-watershed SWC measures (mainly stone bunds) were implemented in 2011 whereas the other watershed remains as an untreated reference. Mean annual precipitation is about 1200 mm from which approximately 90 % rains between June and September. Soil textures range from clay loam to clay. Land use of both watersheds is similar with approximately 60 % of agricultural land. Main crops grown are sorghum, teff, sorghum, faba bean, barley, wheat and chickpea. Since 2011, an automatic weather station is installed as well as weirs are installed at the sub-catchments’ outlets to measure runoff. For each erosive event manual samples are taken in addition to a turbidity sensor to monitor sediment yield. The SWAT model calibration was performed using daily based runoff and sediment yield data recorded during rainy season in 2012 with the help of SWAT-CUP. The results for runoff show acceptable to satisfying performance on a daily basis. The Nash-Sutcliffe Efficiency (NSE) is 0.39 and 0.04 for the untreated and treated sub-watershed respectively. Although the model shows an unacceptable soil loss fit on a daily basis it shows satisfying results on a seasonal basis with a simulated mean annual soil loss rate for 2006-2012 of 37.8 t/ha and 32.4 t/ha for the untreated and the treated sub-catchment respectively.