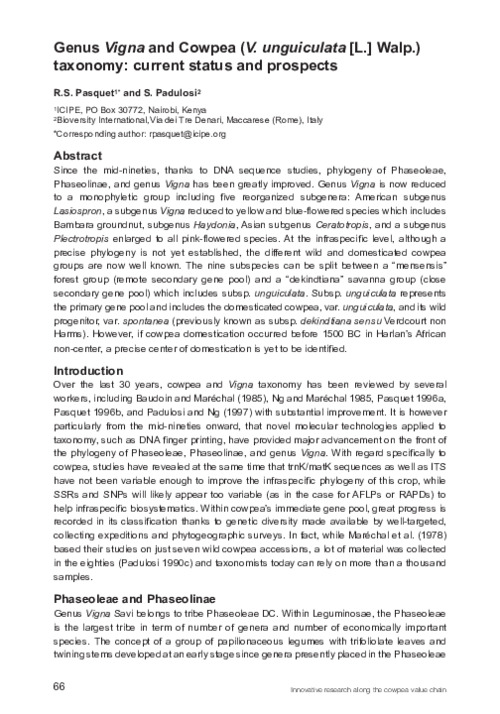 Since the mid-nineties, thanks to DNA sequence studies, phylogeny of Phaseoleae, Phaseolinae, and genus Vigna has been greatly improved. Genus Vigna is now reduced to a monophyletic group including five reorganized subgenera: American subgenus Lasiospron, a subgenus Vigna reduced to yellow and blue-flowered species which includes Bambara groundnut, subgenus Haydonia, Asian subgenus Ceratotropis, and a subgenus Plectrotropis enlarged to all pink-flowered species. At the infraspecific level, although a precise phylogeny is not yet established, the different wild and domesticated cowpea groups are now well known. The nine subspecies can be split between a “mensensis” forest group (remote secondary gene pool) and a “dekindtiana” savanna group (close secondary gene pool) which includes subsp. unguiculata. Subsp. unguiculata represents the primary gene pool and includes the domesticated cowpea, var. unguiculata, and its wild progenitor, var. spontanea (previously known as subsp. dekindtiana sensu Verdcourt non Harms). However, if cowpea domestication occurred before 1500 BC in Harlan’s African non-center, a precise center of domestication is yet to be identified.