Assessing the impacts of livestock production on biodiversity in rangeland ecosystems 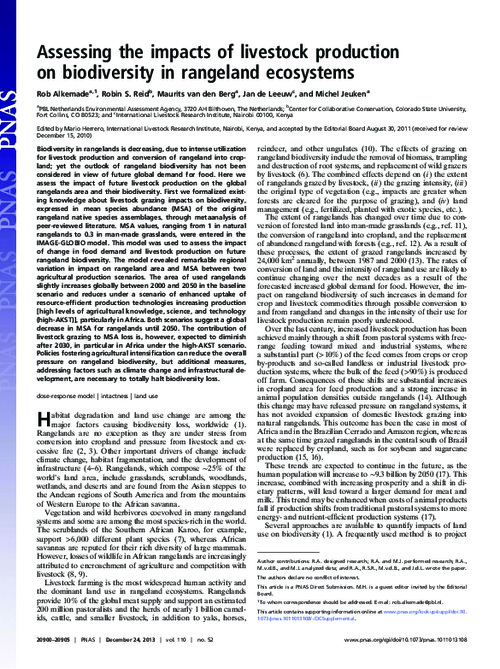 Biodiversity in rangelands is decreasing, due to intense utilization for livestock production and conversion of rangeland into cropland; yet the outlook of rangeland biodiversity has not been considered in view of future global demand for food. Here we assess the impact of future livestock production on the global rangelands area and their biodiversity. First we formalized existing knowledge about livestock grazing impacts on biodiversity, expressed in mean species abundance (MSA) of the original rangeland native species assemblages, through metaanalysis of peer-reviewed literature. MSA values, ranging from 1 in natural rangelands to 0.3 in man-made grasslands, were entered in the IMAGE-GLOBIO model. This model was used to assess the impact of change in food demand and livestock production on future rangeland biodiversity. The model revealed remarkable regional variation in impact on rangeland area and MSA between two agricultural production scenarios. The area of used rangelands slightly increases globally between 2000 and 2050 in the baseline scenario and reduces under a scenario of enhanced uptake of resource-efficient production technologies increasing production [high levels of agricultural knowledge, science, and technology (high-AKST)], particularly in Africa. Both scenarios suggest a global decrease in MSA for rangelands until 2050. The contribution of livestock grazing to MSA loss is, however, expected to diminish after 2030, in particular in Africa under the high-AKST scenario. Policies fostering agricultural intensification can reduce the overall pressure on rangeland biodiversity, but additional measures, addressing factors such as climate change and infrastructural development, are necessary to totally halt biodiversity loss.