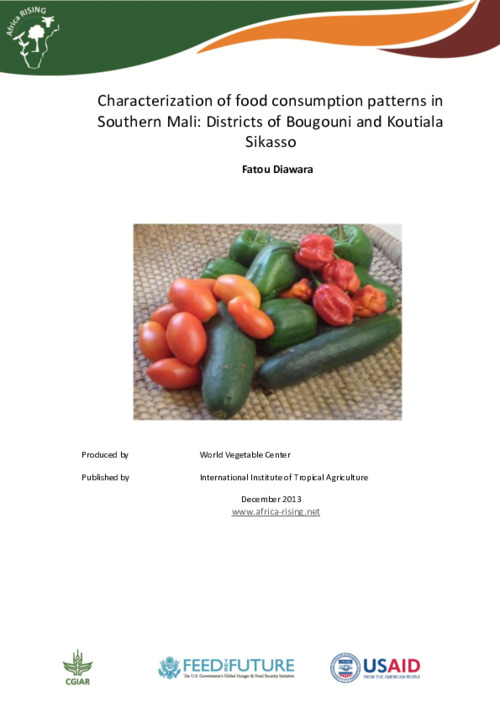 Introduction: In Sikasso there is a great potential of food crops with high nutritional value. However, food security cannot be ensured, justifying the completion of this study whose objective was to provide information on dietary diversity, knowledge of basic nutrition, access to food, intake of vegetables, composition of food, frequency, number of meals and their distribution within the family. Methodology: The study was a cross sampling simple random cross-sectional survey. It lasted 30 days and involved three villages from the district of Koutiala and three villages from the district of Bougouni, women of childbearing age from 15 to 49 years and heads of families. In total 134 women were interviewed and 12 focus groups conducted with six women and six heads of families. The data were entered on the software Epi Data 3.1 and analyzed with the software SPSS 20.0. We used the “khi deux” test of Pearson and Fisher's exact test. Main results: In Bougouni and Koutiala women had little knowledge about nutrition. It appeared that trained women had more knowledge compared to untrained women. The staple diet was cereal and baobab leaves, other foods were not used and undervalued and households had an average of three meals per day. The diet was not balanced and dietary diversity score was predominantly low to medium. As a conclusion, nutritional security was not achieved especially as food use was not ensured. Training had brought more noticeable knowledge in the village of M'pessoba than that of in the village of Sirakele.