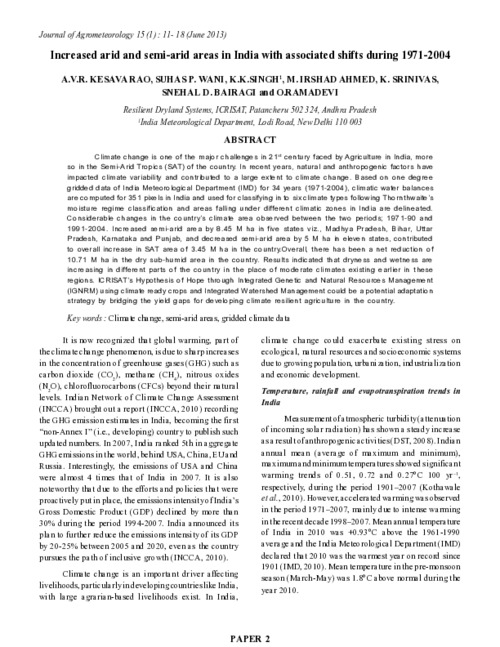 Climate change is one of the major challenges in 21st century faced by Agriculture in India, more so in the Semi-Arid Tropics (SAT) of the country. In recent years, natural and anthropogenic factors have impacted climate variability and contributed to a large extent to climate change. Based on one degree gridded data of India Meteorological Department (IMD) for 34 years (1971-2004), climatic water balances are computed for 351 pixels in India and used for classifying in to six climate types following Thornthwaite’s moisture regime classification and areas falling under different climatic zones in India are delineated. Considerable changes in the country’s climate area observed between the two periods; 1971-90 and 1991-2004. Increased semi-arid area by 8.45 M ha in five states viz., Madhya Pradesh, Bihar, Uttar Pradesh, Karnataka and Punjab, and decreased semi-arid area by 5 M ha in eleven states, contributed to overall increase in SAT area of 3.45 M ha in the country.Overall, there has been a net reduction of 10.71 M ha in the dry sub-humid area in the country. Results indicated that dryness and wetness are increasing in different parts of the country in the place of moderate climates existing earlier in these regions. ICRISAT’s Hypothesis of Hope through Integrated Genetic and Natural Resources Management (IGNRM) using climate ready crops and Integrated Watershed Management could be a potential adaptation strategy by bridging the yield gaps for developing climate resilient agriculture in the country