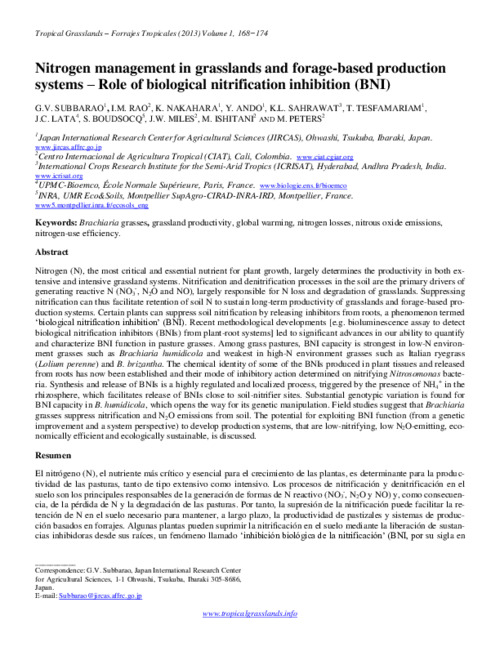 Nitrogen (N), the most critical and essential nutrient for plant growth, largely determines the productivity in both extensive and intensive grassland systems. Nitrification and denitrification processes in the soil are the primary drivers of generating reactive N (NO3, N2O and NO), largely responsible for N loss and degradation of grasslands. Suppressing nitrification can thus facilitate retention of soil N to sustain longterm productivity of grasslands and foragebased production systems. Certain plants can suppress soil nitrification by releasing inhibitors from roots, a phenomenon termed ‘biological nitrification inhibition’ (BNI). Recent methodological developments [e.g. bioluminescence assay to detect biological nitrification inhibitors (BNIs) from plantroot systems] led to significant advances in our ability to quantify and characterize BNI function in pasture grasses. Among grass pastures, BNI capacity is strongest in lowN environment grasses such as Brachiaria humidicola and weakest in highN environment grasses such as Italian ryegrass (Lolium perenne) and B. brizantha. The chemical identity of some of the BNIs produced in plant tissues and released from roots has now been established and their mode of inhibitory action determined on nitrifying Nitrosomonas bacteria. Synthesis and release of BNIs is a highly regulated and localized process, triggered by the presence of NH4+ in the rhizosphere, which facilitates release of BNIs close to soilnitrifier sites. Substantial genotypic variation is found for BNI capacity in B. humidicola, which opens the way for its genetic manipulation. Field studies suggest that Brachiaria grasses suppress nitrification and N2O emissions from soil. The potential for exploiting BNI function (from a genetic improvement and a system perspective) to develop production systems, that are lownitrifying, low N2Oemitting, economically efficient and ecologically sustainable, is discussed