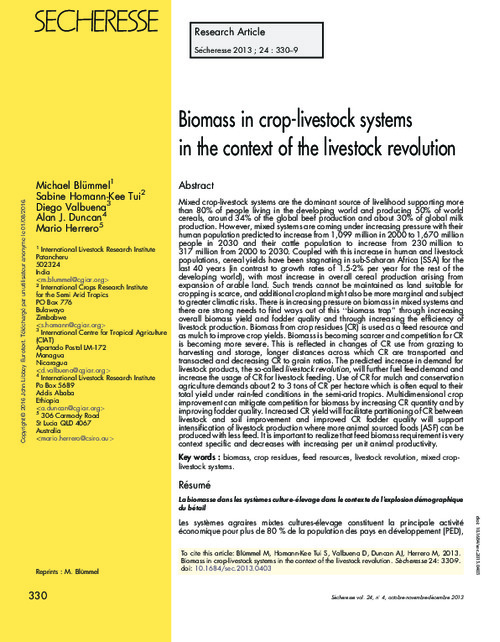 Mixed crop-livestock systems are the dominant source of livelihood supporting more than 80% of people living in the developing world and producing 50% of world cereals, around 34% of the global beef production and about 30% of global milk production. However, mixed systems are coming under increasing pressure with their human population predicted to increase from 1,099 million in 2000 to 1,670 million people in 2030 and their cattle population to increase from 230 million to 317 million from 2000 to 2030. Coupled with this increase in human and livestock populations, cereal yields have been stagnating in sub-Saharan Africa (SSA) for the last 40 years (in contrast to growth rates of 1.5-2% per year for the rest of the developing world), with most increase in overall cereal production arising from expansion of arable land. Such trends cannot be maintained as land suitable for cropping is scarce, and additional cropland might also be more marginal and subject to greater climatic risks. There is increasing pressure on biomass in mixed systems and there are strong needs to find ways out of this ‘‘biomass trap’’ through increasing overall biomass yield and fodder quality and through increasing the efficiency of livestock production. Biomass from crop residues (CR) is used as a feed resource and as mulch to improve crop yields. Biomass is becoming scarcer and competition for CR is becoming more severe. This is reflected in changes of CR use from grazing to harvesting and storage, longer distances across which CR are transported and transacted and decreasing CR to grain ratios. The predicted increase in demand for livestock products, the so-called livestock revolution, will further fuel feed demand and increase the usage of CR for livestock feeding. Use of CR for mulch and conservation agriculture demands about 2 to 3 tons of CR per hectare which is often equal to their total yield under rain-fed conditions in the semi-arid tropics. Multidimensional crop improvement can mitigate competition for biomass by increasing CR quantity and by improving fodder quality. Increased CR yield will facilitate partitioning of CR between livestock and soil improvement and improved CR fodder quality will support intensification of livestock production where more animal sourced foods (ASF) can be produced with less feed. It is important to realize that feed biomass requirement is very context specific and decreases with increasing per unit animal productivity.