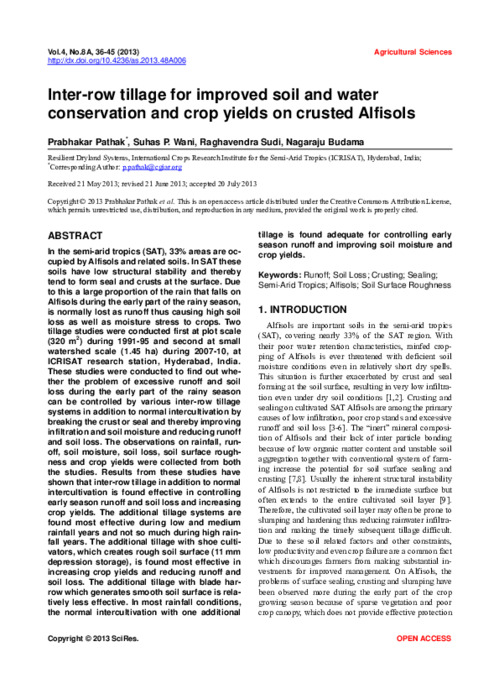 In the semi-arid tropics (SAT), 33% areas are oc- cupied by Alfisols and related soils. In SAT these soils have low structural stability and thereby tend to form seal and crusts at the surface. Due to this a large proportion of the rain that falls on Alfisols during the early part of the rainy season, is normally lost as runoff thus causing high soil loss as well as moisture stress to crops. Two tillage studies were conducted first at plot scale (320 m2) during 1991-95 and second at small watershed scale (1.45 ha) during 2007-10, at ICRISAT research station, Hyderabad, India. These studies were conducted to find out whe- ther the problem of excessive runoff and soil loss during the early part of the rainy season can be controlled by various inter-row tillage systems in addition to normal intercultivation by breaking the crust or seal and thereby improving infiltration and soil moisture and reducing runoff and soil loss. The observations on rainfall, run- off, soil moisture, soil loss, soil surface rough- ness and crop yields were collected from both the studies. Results from these studies have shown that inter-row tillage in addition to normal intercultivation is found effective in controlling early season runoff and soil loss and increasing crop yields. The additional tillage systems are found most effective during low and medium rainfall years and not so much during high rain- fall years. The additional tillage with shoe culti- vators, which creates rough soil surface (11 mm depression storage), is found most effective in increasing crop yields and reducing runoff and soil loss. The additional tillage with blade har- row which generates smooth soil surface is rela- tively less effective. In most rainfall conditions, the normal intercultivation with one additional tillage is found adequate for controlling early season runoff and improving soil moisture and crop yields.