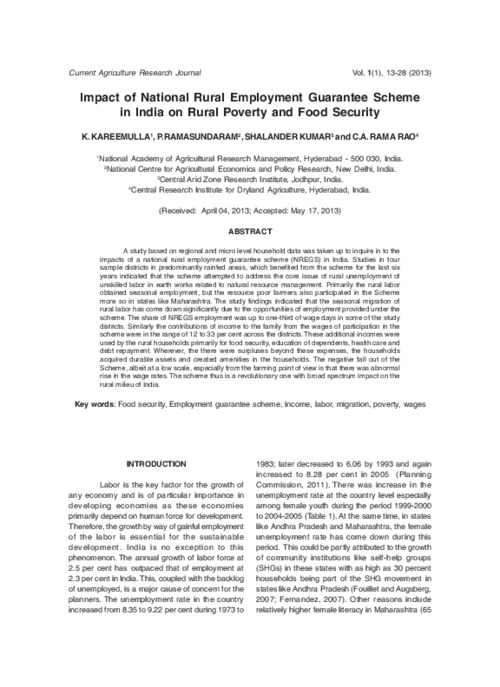 A study based on regional and micro level household data was taken up to inquire in to the impacts of a national rural employment guarantee scheme (NREGS) in India. Studies in four sample districts in predominantly rainfed areas, which benefited from the scheme for the last six years indicated that the scheme attempted to address the core issue of rural unemployment of unskilled labor in earth works related to natural resource management. Primarily the rural labor obtained seasonal employment, but the resource poor farmers also participated in the Scheme more so in states like Maharashtra. The study findings indicated that the seasonal migration of rural labor has come down significantly due to the opportunities of employment provided under the scheme. The share of NREGS employment was up to one-third of wage days in some of the study districts. Similarly the contributions of income to the family from the wages of participation in the scheme were in the range of 12 to 33 per cent across the districts. These additional incomes were used by the rural households primarily for food security, education of dependents, health care and debt repayment. Wherever, the there were surpluses beyond these expenses, the households acquired durable assets and created amenities in the households. The negative fall out of the Scheme, albeit at a low scale, especially from the farming point of view is that there was abnormal rise in the wage rates. The scheme thus is a revolutionary one with broad spectrum impact on the rural milieu of India.