Responses of phenology, synchrony and fecundity of breeding by African ungulates to interannual variation in rainfall 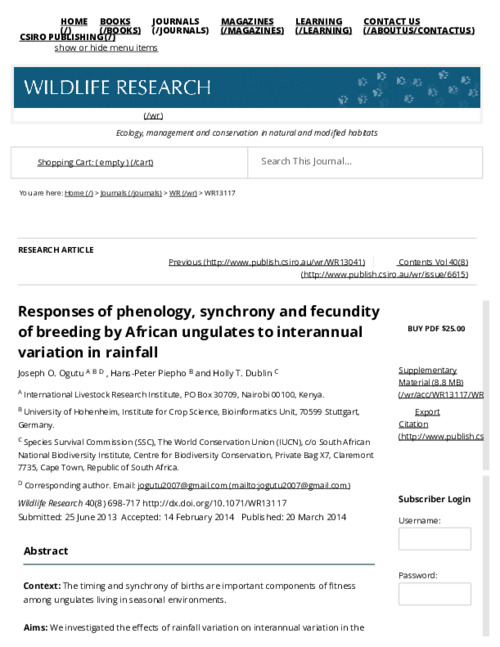 Context: The timing and synchrony of births are important components of fitness among ungulates living in seasonal environments. Aims: We investigated the effects of rainfall variation on interannual variation in the timing, synchrony and prolificacy of births for six African ungulate species inhabiting an equatorial savanna with bimodal rainfall. Methods: We analyse how seasonally and aseasonally breeding African savanna ungulates maintain reproductive success despite rainfall constraints, and adjust the phenology, synchrony and fecundity of their breeding to track interannual variation in rainfall. We use data on six ungulate species inhabiting the Masai Mara National Reserve (Mara) of Kenya to test five hypotheses concerning the influences of seasonality in resources, gestation length and the hider–follower strategy on the timing, synchrony and prolificacy of calving. Key results: Births were more synchronised for topi, warthog and zebra than for hartebeest, impala, and giraffe. Births occurred in most months, but tended to peak during the early rains when forage quality peaks for all species. The rainfall component exerting the strongest influence on timing of births varied with species. Gestation length, the hider–follower dichotomy, and hence predation, had apparently weak influences on birth synchrony. In drought years with nutritionally deficient forage, births were delayed, less synchronised and fewer. This portrayed protracted calving seasons, suppression of early conceptions, and delayed onset of births, calf losses, reproductive pauses or failures. However, in rainy years with sufficient forage, births peaked early, or were not delayed, and the synchronicity of calving increased for all species. This suggested early breeding by primiparous females; or higher fertility early in the mating period. The prolificity of calving increased with rainfall for topi and warthog but decreased for the remaining species. Conclusions: Marked interannual variability in rainfall, plant phenology and forage sufficiency in tropical savannas impose strong constraints on ungulates, favouring flexible timing of births over strictly seasonal reproduction characteristic of temperate latitudes with predictable seasonal resource cues. Implications: Despite high flexibility in their timing of births, widening rainfall variability expected to result from global warming could lower reproductive success of tropical ungulates by lowering their fecundity and survival prospects of their calves if droughts became more frequent and severe.