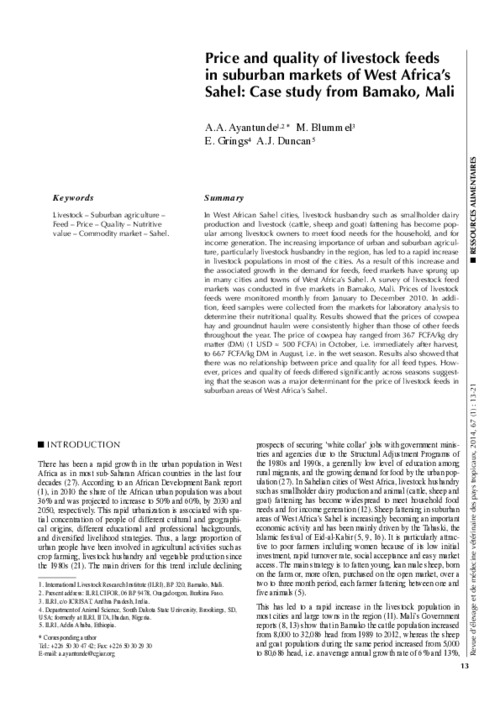 In West African Sahel cities, livestock husbandry such as smallholder dairy production and livestock (cattle, sheep and goat) fattening has become popular among livestock owners to meet food needs for the household, and for income generation. The increasing importance of urban and suburban agriculture, particularly livestock husbandry in the region, has led to a rapid increase in livestock populations in most of the cities. As a result of this increase and the associated growth in the demand for feeds, feed markets have sprung up in many cities and towns of West Africa’s Sahel. A survey of livestock feed markets was conducted in five markets in Bamako, Mali. Prices of livestock feeds were monitored monthly from January to December 2010. In addition, feed samples were collected from the markets for laboratory analysis to determine their nutritional quality. Results showed that the prices of cowpea hay and groundnut haulm were consistently higher than those of other feeds throughout the year. The price of cowpea hay ranged from 367 FCFA/kg dry matter (DM) (1 USD ≈ 500 FCFA) in October, i.e. immediately after harvest, to 667 FCFA/kg DM in August, i.e. in the wet season. Results also showed that there was no relationship between price and quality for all feed types. However, prices and quality of feeds differed significantly across seasons suggesting that the season was a major determinant for the price of livestock feeds in suburban areas of West Africa’s Sahel.