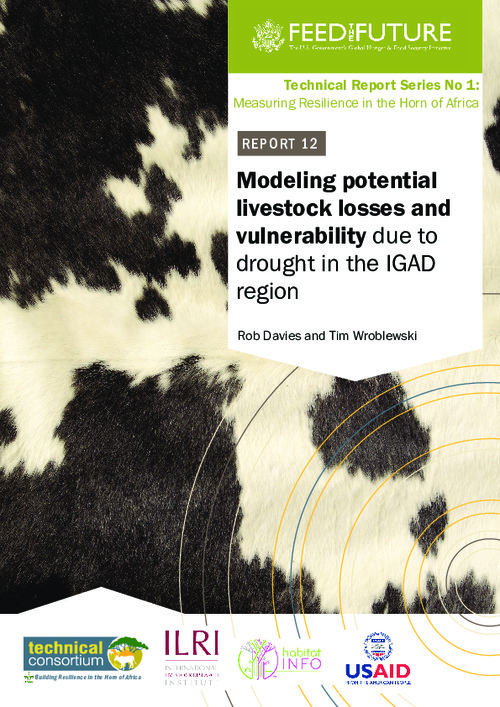 The Horn of Africa is predominantly comprised of arid or semi-arid lands, and is a naturally drought-prone region. With increasing pastoral or agro-pastoral land use, the environment and pastoral communities in this region are progressively susceptible to severe drought. In particular, heavy stocking of the land and consequent overgrazing will extend existing droughts, while denuded vegetation is the primary cause of further desertification and an increase in future droughts. This imbalance of livestock requirements and pasture availability results in livestock mortalities and food security issues. It is therefore imperative that such pastoral communities be resilient to an environmental shock such as severe drought, in order to sustain food security in terms of livestock (where resilience applies to the conditions that affect the impact of the shock and the ability of a community to timely recover following the shock). Measuring the resilience to drought of pastoral communities within the Horn of Africa is therefore key to ameliorate or avert further livestock losses in this region, and to support the much-needed paradigm shift from relief to region- and community-specific development. Two components of the drought module have been developed to complement the existing spatial tool1. Module A (general drought risk) identifies areas in need of help across multiple sectors throughout the whole region using medium to long-term data on drought exposure risk. Module B (pastoral livestock risk) highlights pastoral and agro-pastoral localities where farmers and dependents may be at risk of significant livestock mortalities in the short-term