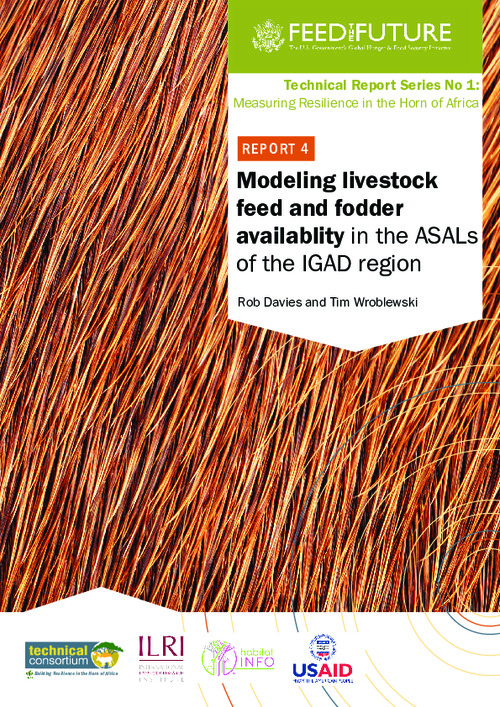 In the arid parts of Africa there is a strong relationship between rainfall and plant production. This is especially prevalent in areas that receive less than 300mm rain per annum, where water is the principal limiting factor to plant growth. Above this amount of rainfall, other factors (in particular soil nutrients) play an increasing role in influencing plant production. The relationship between production and rainfall falls away in global grasslands receiving more than 1035mm rain per annum 1. Above this level of rainfall, livestock population dynamics are also more heavily influenced by other factors such as vector-borne diseases. For the arid Horn of Africa, the cut-off of 1035mm corresponds most closely to the wetter margin of the pastoral and agro-pastoral land uses as defined by Cecchi et al. (2010) 2. It is therefore chosen as the limit of functionality and usefulness for this model. The arid and semi arid regions of Africa, so-defined, are characterized by high inter-annual variation in rainfall, and extended droughts have been known to cause dramatic livestock mortalities that may culminate in certain cases in wide-scale humanitarian emergencies. It is to diminish the risks of such emergencies that the Technical Consortium and ILRI are looking to guide agencies to build resilience, including ecological resilience in the region. This model is offered as a resilience-building mechanism by providing understanding of and promoting balance within the lower trophic interaction between herbivores (livestock) and their vegetation food base. Natural vegetation in these arid regions is often made up of grassland pasture or dwarf shrubland or an inter-changeable mix of the two. Tall shrubs and trees (phanerophytes) are sparsely distributed in arid regions, often along water courses. Part of the vegetation phytomass exists as woody or inedible rhizome material that persists as standing crop from one season to another and which makes up the building blocks for subsequent fresh growth when the rains arrive. The building blocks are not fixed year to year but may accumulate in years of good rainfall or decline during drought. This separation of persistent phytomass and more variable fresh growth is analogous to the concepts of capital (which can appreciate or depreciate in value) and interest on that capital from financial systems.