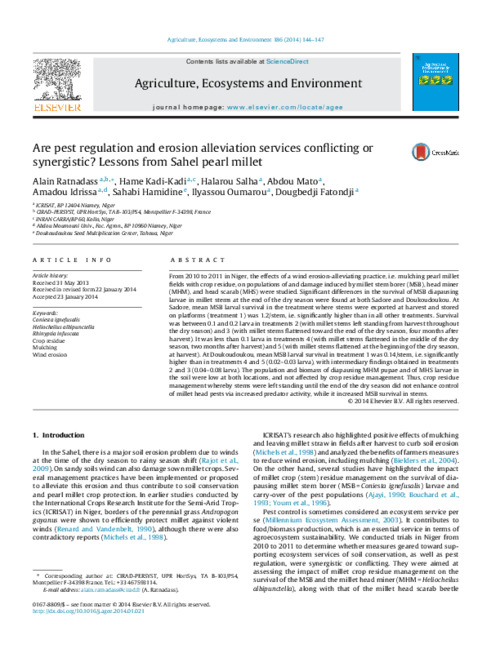 tFrom 2010 to 2011 in Niger, the effects of a wind erosion-alleviating practice, i.e. mulching pearl milletfields with crop residue, on populations of and damage induced by millet stem borer (MSB), head miner(MHM), and head scarab (MHS) were studied. Significant differences in the survival of MSB diapausinglarvae in millet stems at the end of the dry season were found at both Sadore and Doukoudoukou. AtSadore, mean MSB larval survival in the treatment where stems were exported at harvest and storedon platforms (treatment 1) was 1.2/stem, i.e. significantly higher than in all other treatments. Survivalwas between 0.1 and 0.2 larva in treatments 2 (with millet stems left standing from harvest throughoutthe dry season) and 3 (with millet stems flattened toward the end of the dry season, four months afterharvest). It was less than 0.1 larva in treatments 4 (with millet stems flattened in the middle of the dryseason, two months after harvest) and 5 (with millet stems flattened at the beginning of the dry season,at harvest). At Doukoudoukou, mean MSB larval survival in treatment 1 was 0.14/stem, i.e. significantlyhigher than in treatments 4 and 5 (0.02–0.03 larva), with intermediary findings obtained in treatments2 and 3 (0.04–0.08 larva). The population and biomass of diapausing MHM pupae and of MHS larvae inthe soil were low at both locations, and not affected by crop residue management. Thus, crop residuemanagement whereby stems were left standing until the end of the dry season did not enhance controlof millet head pests via increased predator activity, while it increased MSB survival in stems.