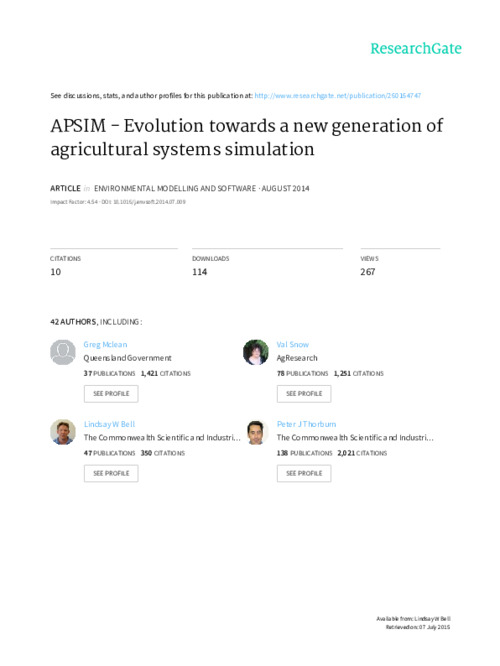 Agricultural systems models worldwide are increasingly being used to explore options and solutions for the food security, climate change adaptation and mitigation and carbon trading problem domains. APSIM (Agricultural Production Systems sIMulator) is one such model that continues to be applied and adapted to this challenging research agenda. From its inception twenty years ago, APSIM has evolved into a framework containing many of the key models required to explore changes in agricultural landscapes with capability ranging from simulation of gene expression through to multi-field farms and beyond. Keating et al. (2003) described many of the fundamental attributes of APSIM in detail. Much has changed in the last decade, and the APSIM community has been exploring novel scientific domains and utilising software developments in social media, web and mobile applications to provide simulation tools adapted to new demands. This paper updates the earlier work by Keating et al. (2003) and chronicles the changing external challenges and opportunities being placed on APSIM during the last decade. It also explores and discusses how APSIM has been evolving to a “next generation” framework with improved features and capabilities that allow its use in many diverse topics.