Cropping systems strategy for effective management of Fusariumwilt in safflower 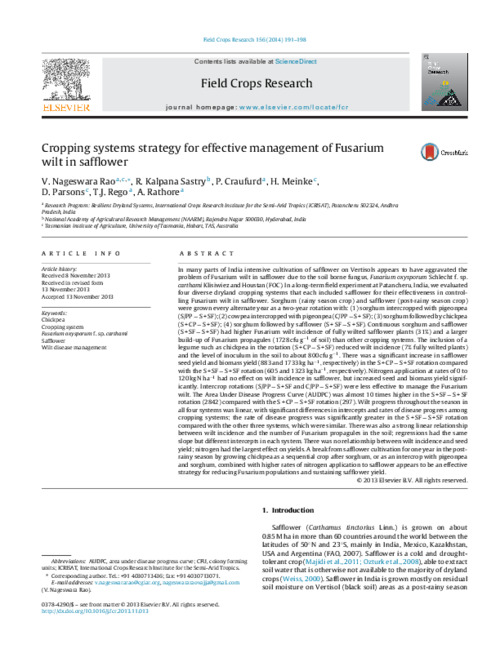 tIn many parts of India intensive cultivation of safflower on Vertisols appears to have aggravated theproblem of Fusarium wilt in safflower due to the soil borne fungus, Fusarium oxysporum Schlecht f. sp.carthami Klisiwiez and Houstan (FOC). In a long-term field experiment at Patancheru, India, we evaluatedfour diverse dryland cropping systems that each included safflower for their effectiveness in control-ling Fusarium wilt in safflower. Sorghum (rainy season crop) and safflower (post-rainy season crop)were grown every alternate year as a two-year rotation with: (1) sorghum intercropped with pigeonpea(S/PP − S + SF); (2) cowpea intercropped with pigeonpea (C/PP − S + SF); (3) sorghum followed by chickpea(S + CP − S + SF); (4) sorghum followed by safflower (S + SF − S + SF). Continuous sorghum and safflower(S + SF − S + SF) had higher Fusarium wilt incidence of fully wilted safflower plants (31%) and a largerbuild-up of Fusarium propagules (1728 cfu g−1of soil) than other cropping systems. The inclusion of alegume such as chickpea in the rotation (S + CP − S + SF) reduced wilt incidence (7% fully wilted plants)and the level of inoculum in the soil to about 800 cfu g−1. There was a significant increase in safflowerseed yield and biomass yield (883 and 1733 kg ha−1, respectively) in the S + CP − S + SF rotation comparedwith the S + SF − S + SF rotation (605 and 1323 kg ha−1, respectively). Nitrogen application at rates of 0 to120 kg N ha−1had no effect on wilt incidence in safflower, but increased seed and biomass yield signif-icantly. Intercrop rotations (S/PP − S + SF and C/PP − S + SF) were less effective to manage the Fusariumwilt. The Area Under Disease Progress Curve (AUDPC) was almost 10 times higher in the S + SF − S + SFrotation (2842) compared with the S + CP − S + SF rotation (297). Wilt progress throughout the season inall four systems was linear, with significant differences in intercepts and rates of disease progress amongcropping systems; the rate of disease progress was significantly greater in the S + SF − S + SF rotationcompared with the other three systems, which were similar. There was also a strong linear relationshipbetween wilt incidence and the number of Fusarium propagules in the soil; regressions had the sameslope but different intercepts in each system. There was no relationship between wilt incidence and seedyield; nitrogen had the largest effect on yields. A break from safflower cultivation for one year in the post-rainy season by growing chickpea as a sequential crop after sorghum, or as an intercrop with pigeonpeaand sorghum, combined with higher rates of nitrogen application to safflower appears to be an effectivestrategy for reducing Fusarium populations and sustaining safflower yield