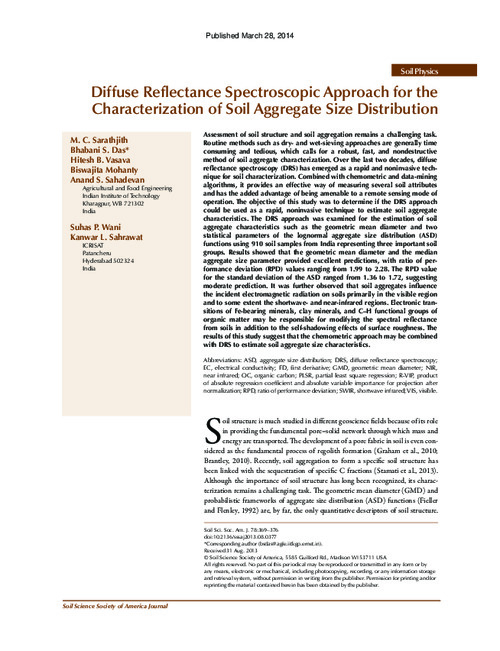 Assessment of soil structure and soil aggregation remains a challenging task. Routine methods such as dry- and wet-sieving approaches are generally time consuming and tedious, which calls for a robust, fast, and nondestructive method of soil aggregate characterization. Over the last two decades, diffuse reflectance spectroscopy (DRS) has emerged as a rapid and noninvasive technique for soil characterization. Combined with chemometric and data-mining algorithms, it provides an effective way of measuring several soil attributes and has the added advantage of being amenable to a remote sensing mode of operation. The objective of this study was to determine if the DRS approach could be used as a rapid, noninvasive technique to estimate soil aggregate characteristics. The DRS approach was examined for the estimation of soil aggregate characteristics such as the geometric mean diameter and two statistical parameters of the lognormal aggregate size distribution (ASD) functions using 910 soil samples from India representing three important soil groups. Results showed that the geometric mean diameter and the median aggregate size parameter provided excellent predictions, with ratio of performance deviation (RPD) values ranging from 1.99 to 2.28. The RPD value for the standard deviation of the ASD ranged from 1.36 to 1.72, suggesting moderate prediction. It was further observed that soil aggregates influence the incident electromagnetic radiation on soils primarily in the visible region and to some extent the shortwave- and near-infrared regions. Electronic transitions of Fe-bearing minerals, clay minerals, and C–H functional groups of organic matter may be responsible for modifying the spectral reflectance from soils in addition to the self-shadowing effects of surface roughness. The results of this study suggest that the chemometric approach may be combined with DRS to estimate soil aggregate size characteristics.