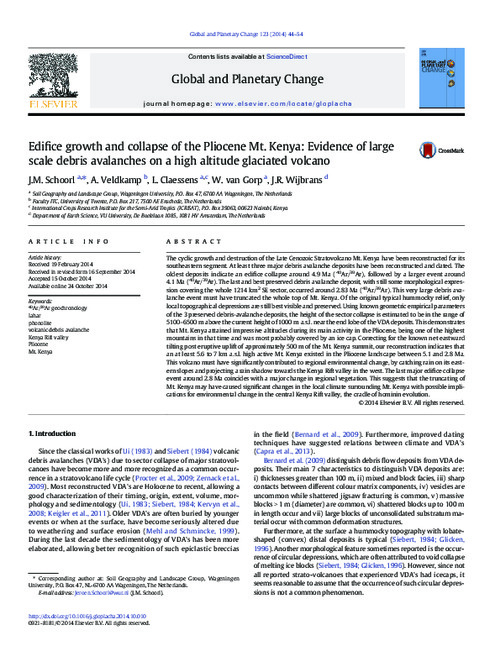 The cyclic growth and destruction of the Late Cenozoic Stratovolcano Mt. Kenya have been reconstructed for its southeastern segment. At least three major debris avalanche deposits have been reconstructed and dated. The oldest deposits indicate an edifice collapse around 4.9 Ma (40Ar/39Ar), followed by a larger event around 4.1 Ma (40Ar/39Ar). The last and best preserved debris avalanche deposit, with still some morphological expression covering the whole 1214 km2 SE sector, occurred around 2.83 Ma (40Ar/39Ar). This very large debris avalanche event must have truncated the whole top of Mt. Kenya. Of the original typical hummocky relief, only local topographical depressions are still best visible and preserved. Using known geometric empirical parameters of the 3 preserved debris-avalanche deposits, the height of the sector collapse is estimated to be in the range of 5100–6500mabove the current height of 1000m a.s.l. near the end lobe of the VDA deposits. This demonstrates that Mt. Kenya attained impressive altitudes during its main activity in the Pliocene, being one of the highest mountains in that time and was most probably covered by an ice cap. Correcting for the known net eastward tilting post eruptive uplift of approximately 500 m of the Mt. Kenya summit, our reconstruction indicates that an at least 5.6 to 7 km a.s.l. high active Mt. Kenya existed in the Pliocene landscape between 5.1 and 2.8 Ma. This volcano must have significantly contributed to regional environmental change, by catching rain on its eastern slopes and projecting a rain shadowtowards the Kenya Rift valley in thewest. The last major edifice collapse event around 2.8 Ma coincides with a major change in regional vegetation. This suggests that the truncating of Mt. Kenya may have caused significant changes in the local climate surrounding Mt. Kenya with possible implications for environmental change in the central Kenya Rift valley, the cradle of hominin evolution.