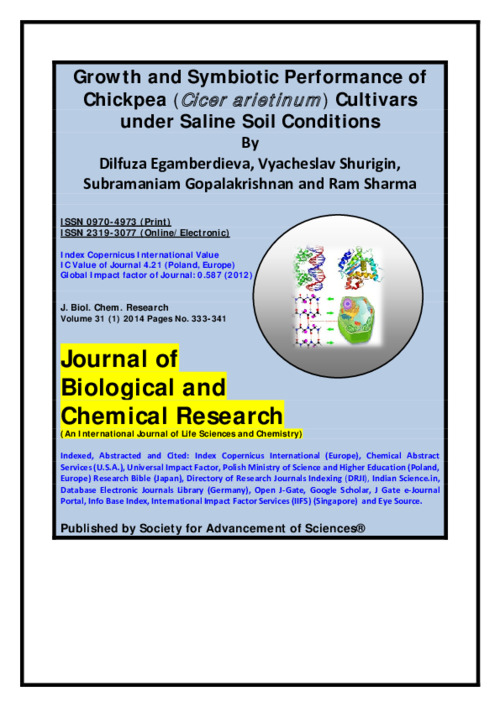 The present study was conducted to investigate growth and symbiotic performance of selected salt tolerant chickpea (Cicer arietinum) cultivars under arid saline soil conditions. Plants were grown in saline soil of Syrdarya province, Uzbekistan. The results showed that the growth and nodulation of chickpea cultivars Uzbekiston-32, Xalima, Miroz, Flip 1-33 and CIEW 45 were much better under saline conditions compared other chickpea cultivars. Inoculation of salt tolerant chickpea cultivars with M. ciceri IC53 significantly increased numbers of nodules on the roots (300%), shoot and root dry weight (27%), pod numbers (28%) and yield (23%). The above results revealed that for achieving the highest symbiotic effectiveness under salinity conditions plant cultivars have to be taken into account. It could be suggested that cultivation of salt tolerant cultivars with its symbiotic partners could be an effective selection technology to overcome the problem of soil salinity. Key words: Chickpea, Cultivars, Salinity, Mezorhizobium ciceri, and Nodulation