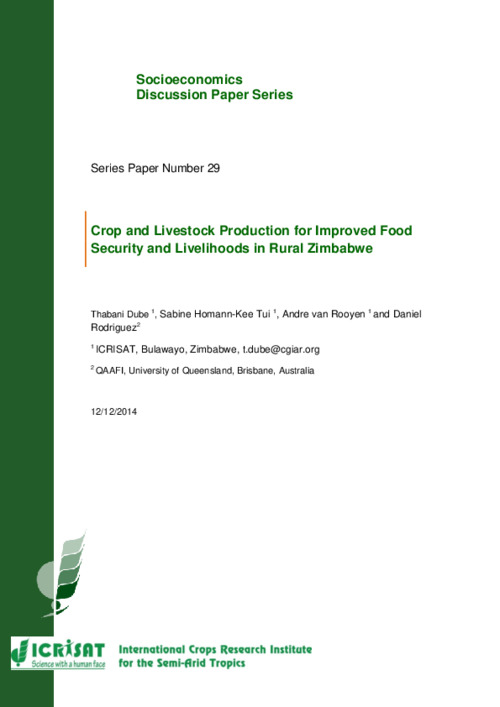 Farmers in Zimbabwe face many challenges, including low soil fertility, low and erratic rainfall, and poor market access. They are therefore often poor and vulnerable to risks and shocks. With increasing human populations and a dwindling natural resource base, farming systems are under greater pressure to provide sufficient food and sustain farmers’ livelihoods. There is a dire need to intensify farming systems on a sustainable basis. Previous efforts have been focusing on improving either crop or livestock production, often ignoring the potential synergies mixed systems offer. We believe that substantial gains can be made by better integrating crop and livestock systems, using the resources more effectively and following a more market-oriented approach. This report describes the baseline situation of crop-livestock systems in semi-arid Zimbabwe. It informs the ZimCLIFS project, which has the goal to improve rural food security and livelihoods through promoting sustainable intensification of integrated crop-livestock systems and market participation. The report focuses on communities in Nkayi and Gwanda Districts, situated in agro-ecological zones IV and V in southwestern Zimbabwe. In each district participatory community visioning was held to identify development pathways that the communities seek to pursue. About 300 households were interviewed to compile data informing a comprehensive farming systems analysis. Descriptive statistics characterize the households, including a disaggregated gender analysis. Through factor and cluster analysis, farm households were grouped into most common-farm types based on resource endowments, agricultural production levels and market markets. Communities in both districts saw their future in market-oriented agriculture. The levels of both crop and livestock production were however very low at both districts. Maize, the predominant crop, yielded less than 400 kg per ha, during a year of relatively low rainfall. Yields of sorghum and groundnuts were even less. Farmers relied mainly on using resources within their systems. Almost all households used animal draft power to plow crop fields, more than half the households fed crop residues to their animals and a third used animal manure as organic fertilizer. The use of external inputs was more limited. Fewer than 20% of households applied fertilizers. In Gwanda about a third of the livestock keepers fed commercial stock-feeds to their animals. As a result of low production, crop sales and livestock off-take rates were also low (<5%), and financial reinvestments limited. Farm typology analysis suggests that households experienced different levels of resource endowments and their investments in agriculture varied. The majority were very poor, especially female-headed households. They need safety support to protect their assets. For them drought-tolerant crops and small stock, improved management and strong support to start marketable production could make a difference. Distinctively different were the groups of intensifying farmers. They were better endowed in resources and access to information, practiced more diversified and integrated farming systems, and earned higher income from agriculture. Even though a small proportion, these farmers are important for promoting improved agricultural production. The farm typologies will be used to simulate potential yields and welfare gains for different types of household in their specific contexts