Impact of depth of placement of mineral fertilizer micro-dosing on growth, yield and partial nutrient balance in pearl millet cropping system in the Sahel 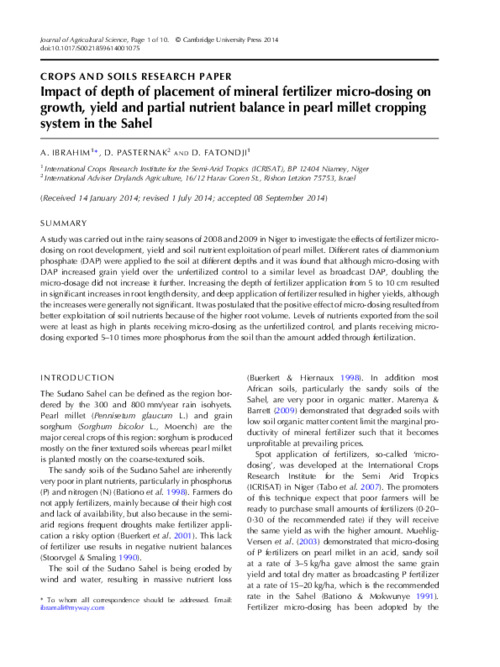 A study was carried out in the rainy seasons of 2008 and 2009 in Niger to investigate the effects of fertilizer microdosing on root development, yield and soil nutrient exploitation of pearl millet. Different rates of diammonium phosphate (DAP) were applied to the soil at different depths and it was found that although micro-dosing with DAP increased grain yield over the unfertilized control to a similar level as broadcast DAP, doubling the micro-dosage did not increase it further. Increasing the depth of fertilizer application from 5 to 10 cm resulted in significant increases in root length density, and deep application of fertilizer resulted in higher yields, although the increases were generally not significant. It was postulated that the positive effect of micro-dosing resulted from better exploitation of soil nutrients because of the higher root volume. Levels of nutrients exported from the soil were at least as high in plants receiving micro-dosing as the unfertilized control, and plants receiving microdosing exported 5–10 times more phosphorus from the soil than the amount added through fertilization.