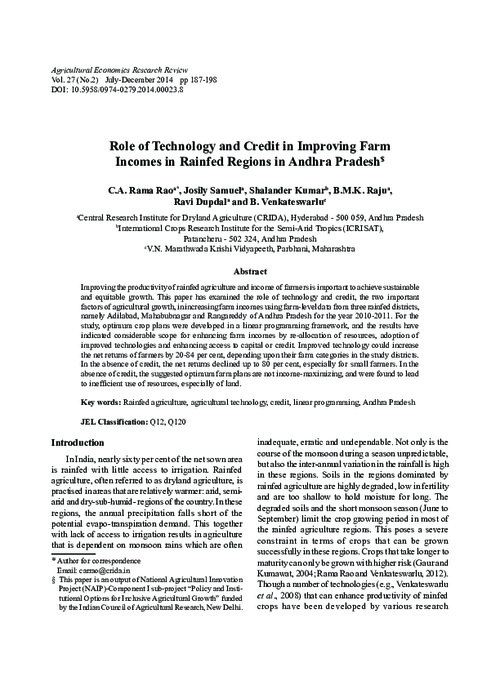 Improving the productivity of rainfed agriculture and income of farmers is important to achieve sustainable and equitable growth. This paper has examined the role of technology and credit, the two important factors of agricultural growth, in increasing farm incomes using farm-level data from three rainfed districts, namely Adilabad, Mahabubnagar and Rangareddy of Andhra Pradesh for the year 2010-2011. For the study, optimum crop plans were developed in a linear programming framework, and the results have indicated considerable scope for enhancing farm incomes by re-allocation of resources, adoption of improved technologies and enhancing access to capital or credit. Improved technology could increase the net returns of farmers by 20-84 per cent, depending upon their farm categories in the study districts. In the absence of credit, the net returns declined up to 80 per cent, especially for small farmers. In the absence of credit, the suggested optimum farm plans are not income-maximizing, and were found to lead to inefficient use of resources, especially of land.