Red ferruginous soils of tropical Indian environments: A review of the pedogenic processes and its implications for edaphology 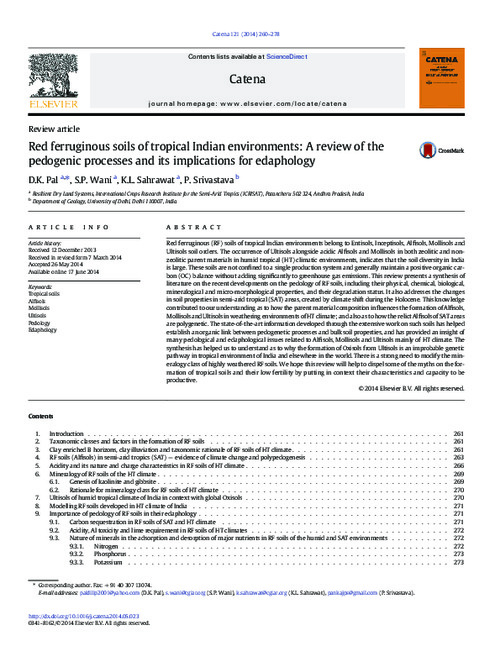 Red ferruginous (RF) soils of tropical Indian environments belong to Entisols, Inceptisols, Alfisols, Mollisols and Ultisols soil orders. The occurrence of Ultisols alongside acidic Alfisols and Mollisols in both zeolitic and nonzeolitic parent materials in humid tropical (HT) climatic environments, indicates that the soil diversity in India is large. These soils are not confined to a single production systemand generally maintain a positive organic carbon (OC) balance without adding significantly to greenhouse gas emissions. This review presents a synthesis of literature on the recent developments on the pedology of RF soils, including their physical, chemical, biological, mineralogical and micro-morphological properties, and their degradation status. It also addresses the changes in soil properties in semi-arid tropical (SAT) areas, created by climate shift during the Holocene. This knowledge contributed to our understanding as to howthe parentmaterial composition influences the formation of Alfisols, Mollisols and Ultisols inweathering environments of HT climate; and also as to howthe relict Alfisols of SAT areas are polygenetic. The state-of-the-art information developed through the extensivework on such soils has helped establish an organic link between pedogenetic processes and bulk soil properties, and has provided an insight of many pedological and edaphological issues related to Alfisols, Mollisols and Ultisols mainly of HT climate. The synthesis has helped us to understand as to why the formation of Oxisols from Ultisols is an improbable genetic pathway in tropical environment of India and elsewhere in the world. There is a strong need to modify the mineralogy class of highlyweathered RF soils.We hope this review will help to dispel some of the myths on the formation of tropical soils and their low fertility by putting in context their characteristics and capacity to be productive