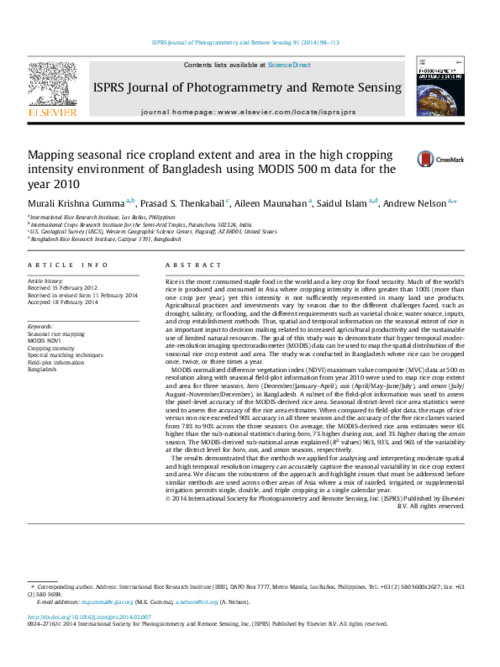 Rice is the most consumed staple food in the world and a key crop for food security. Much of the world’s rice is produced and consumed in Asia where cropping intensity is often greater than 100% (more than one crop per year), yet this intensity is not sufficiently represented in many land use products. Agricultural practices and investments vary by season due to the different challenges faced, such as drought, salinity, or flooding, and the different requirements such as varietal choice, water source, inputs, and crop establishment methods. Thus, spatial and temporal information on the seasonal extent of rice is an important input to decision making related to increased agricultural productivity and the sustainable use of limited natural resources. The goal of this study was to demonstrate that hyper temporal moderate- resolution imaging spectroradiometer (MODIS) data can be used to map the spatial distribution of the seasonal rice crop extent and area. The study was conducted in Bangladesh where rice can be cropped once, twice, or three times a year. MODIS normalized difference vegetation index (NDVI) maximum value composite (MVC) data at 500 m resolution along with seasonal field-plot information from year 2010 were used to map rice crop extent and area for three seasons, boro (December/January–April), aus (April/May–June/July), and aman (July/ August–November/December), in Bangladesh. A subset of the field-plot information was used to assess the pixel-level accuracy of the MODIS-derived rice area. Seasonal district-level rice area statistics were used to assess the accuracy of the rice area estimates. When compared to field-plot data, the maps of rice versus non-rice exceeded 90% accuracy in all three seasons and the accuracy of the five rice classes varied from 78% to 90% across the three seasons. On average, the MODIS-derived rice area estimates were 6% higher than the sub-national statistics during boro, 7% higher during aus, and 3% higher during the aman season. The MODIS-derived sub-national areas explained (R2 values) 96%, 93%, and 96% of the variability at the district level for boro, aus, and aman seasons, respectively. The results demonstrated that the methods we applied for analysing and interpreting moderate spatial and high temporal resolution imagery can accurately capture the seasonal variability in rice crop extent and area. We discuss the robustness of the approach and highlight issues that must be addressed before similar methods are used across other areas of Asia where a mix of rainfed, irrigated, or supplemental irrigation permits single, double, and triple cropping in a single calendar year.