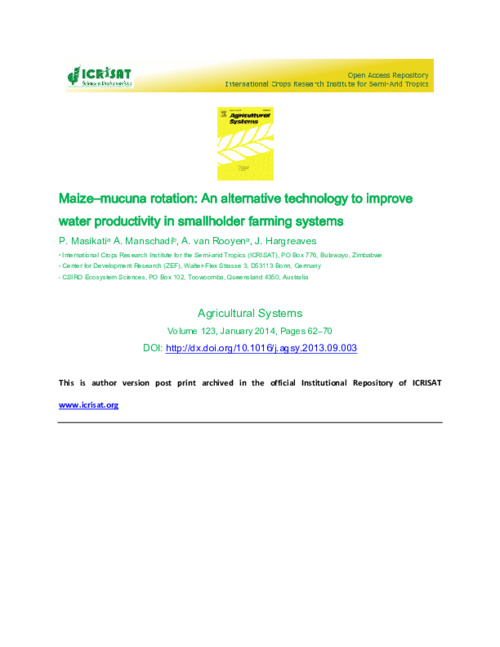 Rain-fed crop production systems in the semi-arid tropics of Zimbabwe are characterized by low water productivity (WP), which is partly attributed to inherent low soil fertility, and further exacerbated by continuous cropping without addition of adequate organic and inorganic fertilizers due to unavailability and high costs. A simulation modeling approach was used to evaluate potential interventions that can be used as entry points to improve crop water productivity. Low-cost interventions that use locally available organic inputs were evaluated using the Agriculture Production Systems Simulator (APSIM). The farmer practice (FP) was compared to interventions comprising manure application (MN) and maize-mucuna rotation (MMR). Their potential effects on crop water productivity, dynamics of soil organic carbon (SOC) and total nitrogen (TN) were assessed. Average maize grain water productivity was 0.32, 0.40 and 0.70 kg m-3 under the FP, MN and MMR treatments, respectively, while that of mucuna biomass (Mucuna pruriens) was 1.34 kg m-3. Cropping under the FP and MN treatments showed negative trends in SOC and TN over 30 years, with average losses ranging from 17 to 74 kg ha-1 yr-1 and 6 to 16 kg ha-1 yr-1, respectively. In contrast, the MMR treatment showed positive trends in both soil organic carbon (SOC) and total nitrogen (TN). The SOC and TN increased by 2.6 to 194 kg ha-1 yr-1 and 6 to 14 kg ha-1 yr-1, respectively. According to the simulation results it can be concluded that the MMR treatment can improve the water productivity of smallholder maize systems in the semi-arid areas of Zimbabwe under nutrient-depleted soil conditions and can also contribute to the building up of SOC and TN.