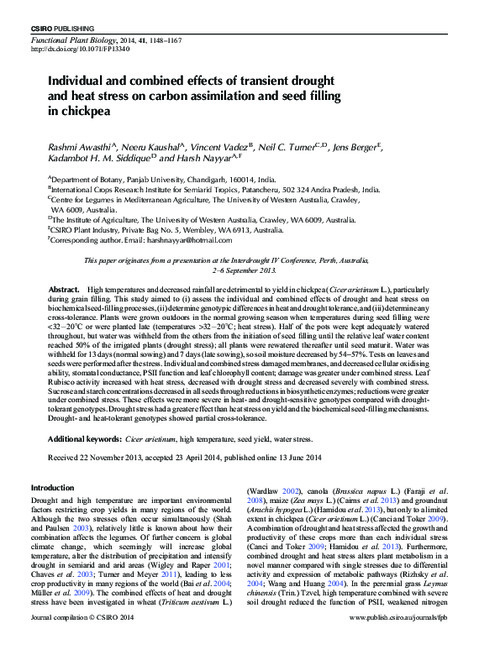 High temperatures and decreased rainfall are detrimental to yield in chickpea (Cicer arietinum L.), particularly during grain filling. This study aimed to (i) assess the individual and combined effects of drought and heat stress on biochemical seed-filling processes, (ii) determine genotypic differences in heat and drought tolerance, and (iii) determine any cross-tolerance. Plants were grown outdoors in the normal growing season when temperatures during seed filling were <32 20 C or were planted late (temperatures >32 20 C; heat stress). Half of the pots were kept adequately watered throughout, but water was withheld from the others from the initiation of seed filling until the relative leaf water content reached 50% of the irrigated plants (drought stress); all plants were rewatered thereafter until seed maturit. Water was withheld for 13 days (normal sowing) and 7 days (late sowing), so soil moisture decreased by 54–57%. Tests on leaves and seeds were performed after the stress. Individual and combined stress damaged membranes, and decreased cellular oxidising ability, stomatal conductance, PSII function and leaf chlorophyll content; damage was greater under combined stress. Leaf Rubisco activity increased with heat stress, decreased with drought stress and decreased severely with combined stress. Sucrose and starch concentrations decreased in all seeds through reductions in biosynthetic enzymes; reductions were greater under combined stress. These effects were more severe in heat- and drought-sensitive genotypes compared with droughttolerant genotypes. Drought stress had a greater effect than heat stress on yield and the biochemical seed-filling mechanisms. Drought- and heat-tolerant genotypes showed partial cross-tolerance.