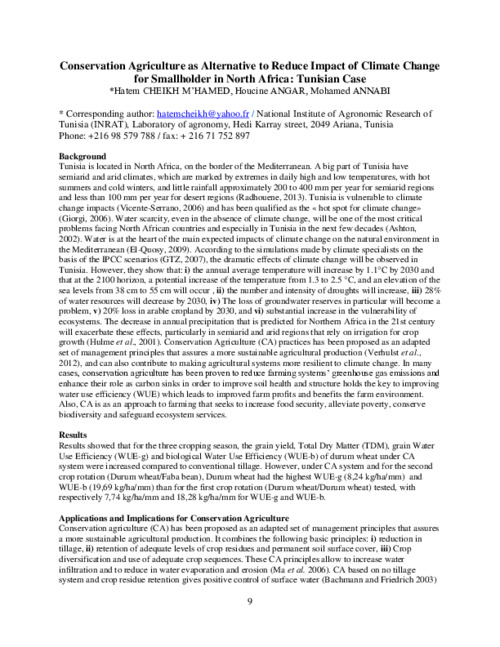 Tunisia is located in North Africa, on the border of the Mediterranean. A big part of Tunisia have semiarid and arid climates, which are marked by extremes in daily high and low temperatures, with hot summers and cold winters, and little rainfall approximately 200 to 400 mm per year for semiarid regions and less than 100 mm per year for desert regions (Radhouene, 2013). Tunisia is vulnerable to climate change impacts (Vicente-Serrano, 2006) and has been qualified as the « hot spot for climate change» (Giorgi, 2006). Water scarcity, even in the absence of climate change, will be one of the most critical problems facing North African countries and especially in Tunisia in the next few decades (Ashton, 2002). Water is at the heart of the main expected impacts of climate change on the natural environment in the Mediterranean (El-Quosy, 2009). According to the simulations made by climate specialists on the basis of the IPCC scenarios (GTZ, 2007), the dramatic effects of climate change will be observed in Tunisia. However, they show that: i) the annual average temperature will increase by 1.1°C by 2030 and that at the 2100 horizon, a potential increase of the temperature from 1.3 to 2.5 °C, and an elevation of the sea levels from 38 cm to 55 cm will occur , ii) the number and intensity of droughts will increase, iii) 28% of water resources will decrease by 2030, iv) The loss of groundwater reserves in particular will become a problem, v) 20% loss in arable cropland by 2030, and vi) substantial increase in the vulnerability of ecosystems. The decrease in annual precipitation that is predicted for Northern Africa in the 21st century will exacerbate these effects, particularly in semiarid and arid regions that rely on irrigation for crop growth (Hulme et al., 2001). Conservation Agriculture (CA) practices has been proposed as an adapted set of management principles that assures a more sustainable agricultural production (Verhulst et al., 2012), and can also contribute to making agricultural systems more resilient to climate change. In many cases, conservation agriculture has been proven to reduce farming systems’ greenhouse gas emissions and enhance their role as carbon sinks in order to improve soil health and structure holds the key to improving water use efficiency (WUE) which leads to improved farm profits and benefits the farm environment. Also, CA is as an approach to farming that seeks to increase food security, alleviate poverty, conserve biodiversity and safeguard ecosystem services.