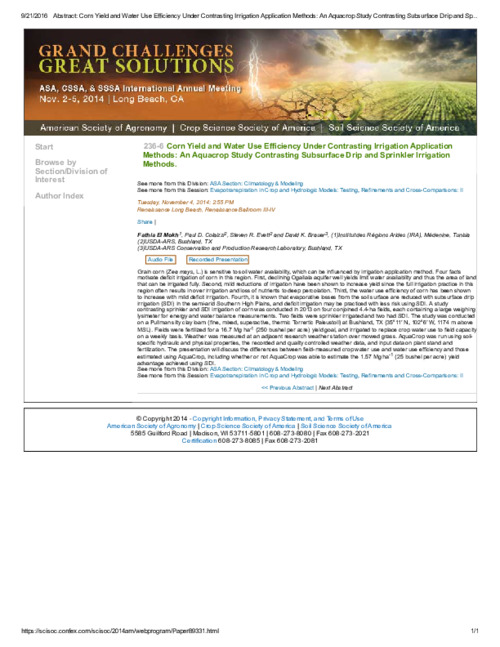 Grain corn (Zea mays, L.) is sensitive to soil water availability, which can be influenced by irrigation application method. Four facts motivate deficit irrigation of corn in this region. First, declining Ogallala aquifer well yields limit water availability and thus the area of land that can be irrigated fully. Second, mild reductions of irrigation have been shown to increase yield since the full irrigation practice in this region often results in over irrigation and loss of nutrients to deep percolation. Third, the water use efficiency of corn has been shown to increase with mild deficit irrigation. Fourth, it is known that evaporative losses from the soil surface are reduced with subsurface drip irrigation (SDI) in the semiarid Southern High Plains, and deficit irrigation may be practiced with less risk using SDI. A study contrasting sprinkler and SDI irrigation of corn was conducted in 2013 on four conjoined 4.4ha fields, each containing a large weighing lysimeter for energy and water balance measurements. Two fields were sprinkler irrigated and two had SDI. The study was conducted on a Pullman silty clay loam (fine, mixed, superactive, thermic Torrertic Paleustoll) at Bushland, TX (35°11′ N, 102°6′ W, 1174 m above MSL). Fields were fertilized for a 16.7 Mg ha1 (250 bushel per acre) yield goal, and irrigated to replace crop water use to field capacity on a weekly basis. Weather was measured at an adjacent research weather station over mowed grass. AquaCrop was run using soilspecific hydraulic and physical properties, the recorded and quality controlled weather data, and input data on plant stand and fertilization. The presentation will discuss the differences between fieldmeasured crop water use and water use efficiency and those estimated using AquaCrop, including whether or not AquaCrop was able to estimate the 1.57 Mg ha1 (25 bushel per acre) yield advantage achieved using SDI.