Diverse and resilient agro-pastoral systems: a common goal for the Mediterranean regions 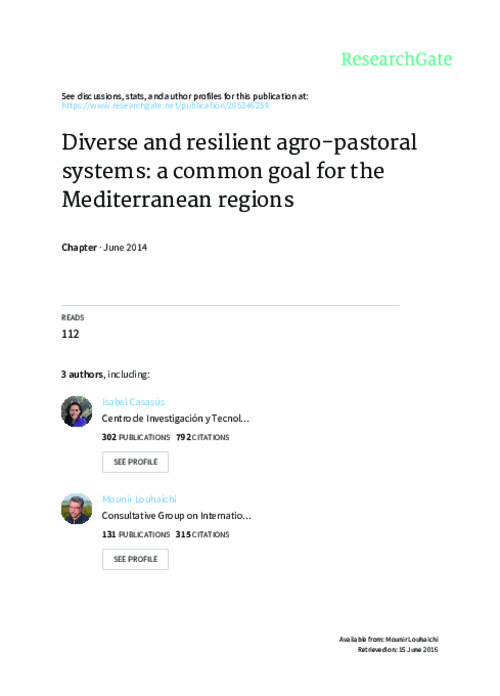 The potential of agriculture to maintain or even further intensify production to meet the food and fibre needs of increasing populations without degrading the capacity of the resource base is a major concern worldwide. This review briefly assesses options for the ecological intensification and increased resilience in agro-pastoral systems from the dual perspectives in the southern and the northern Mediterranean by providing examples of successful case studies. Despite the significant disparities in demographic, economic and agricultural land utilization patterns between countries in the north and south Mediterranean, improved animal and crop production is a shared priority with lesser concerns for preserving the natural resources in the southern part of the basin. While intensification may be a more achievable target in favourable areas of the northern Mediterranean, it is crucial to increase the resilience of resource poor agro-pastoral systems through sustainable management in the arid regions of the southern part. As the pressures on land and water resources increase, the major challenge today is how to achieve ecological intensification to be able to sustain the food security without compromising the environmental quality and natural resources that underpin crop and livestock production in the Mediterranean region. Fundamentally, ecological intensification is closely associated with increased efficiency and successful adjustment of seasonal herd management to available feed resources in agro-pastoral systems. Concomitantly, livestock can be used as a tool for the preservation of the natural resources, either by adapting management in conventional systems or through the design of new environmentally-targeted production systems. In addition, in mixed farming systems of the Mediterranean region, inclusion of locally available improved forage legumes in cropping rotations and the use of alternative fodder plants like shrubs and cactus in alley cropping system particularly in marginal areas to increase the availability of high quality feed resources are among the most viable options to achieve diverse and resilient agro-pastoral systems.